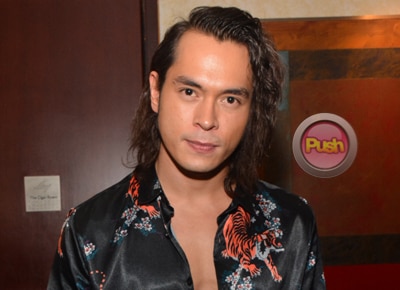 Jake Cuenca was quick to clarify that he was only having a good time at the recently concluded Star Magic Ball and not instigating a commotion.

“Definitely I had way too much fun. Medyo naparami ako ng inom so inalalayan ako ng handler ko, ng dalawang road manager ko,” he said in an interview after the announcement of his reunion soap with Kim Chiu and Gerald Anderson titled Ikaw Lang Ang Iibigin.

Reports had it that the stir involving Jake happened when Jericho Rosales was accepting his Icon award.

He added, “Medyo nag-mukha lang na may commotion pero in reality, I was having way too much fun and they just wanted me to go up and rest.”

In relation to supposedly “upstaging” Jericho’s moment, Jake said that they were able to talk about it.

“I’ve always said, hanggang ngayon naman, she will always have a special place in my heart but I have to move forward and she’s doing the same thing,” he said.

Jake reiterated, “I’ll always respect her and never forget the memories I spent with her.”

There have recent rumors linking him to his former Pasion de Amor co-star Ellen Adarna.

Once and for all, the Mulat actor addressed the issue.

The actor even stressed that if there were something from the three ladies with whom he worked with on the sexy soap that he finds attractive it would have to be Arci Muñoz.

“Sa hinaba-haba ng tinakbo ng Pasion de Amor, if I ever found anyone attractive, it’s always Arci (Munoz). So I just want to put that out there,” he ended.