Angelia admits being hurt by the circumstances that happened when Pia won the Miss Universe crown. 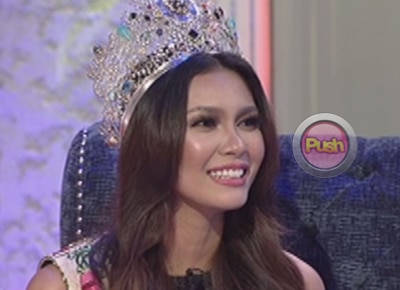 During her interview on Tonight with Boy Abunda last October 26, Miss Earth 2015 Angelia Ong admitted she felt hurt when her tirumph in the beauty pageant was not given importance because it was overshadowed by Pia Wurtzbach becoming Miss Universe.

“Well, honestly Tito Boy, there was really a time na iniyakan ko po. Yes, because I won in Vienna on December 5 and Pia won two weeks after. As a Filipina I am so proud of her, I adore her. I respect yung pinagdaanan niya, nakakarelate po kasi ako eh, Tito Boy. It wasn’t also easy for me, I’ve also had a couple of pageants before winning the crown. But as Miss Earth, nalungkot ako ng konti, di na nagkaroon ng opportunity to have a welcome home parade. Tapos I wasn’t able to meet the president, even the past one,” she revealed.

However, Angelia said she chose to focus on the reason why she became Miss Earth instead of negative circumstances.

“Yes po nasaktan po talaga ako pero what I did was I went back to the reason why I did this, it’s just not about fame, attention. I joined not only for myself, my family but also for the core and advocacy of the pageant, which is protecting and preserving the environment. So naging busy po ako for the first few months with the projects.”

The beauty queen also shared what she hopes to impart to the public as Miss Earth 2015.

“Nung nanalo kasi ako hindi lahat naging masaya, kasi every one was telling me it was not possible to have a back-to-back win especially from a pageant that’s Filipino grown, I’m a Filipina but I’m really proud I was able to bring home the crown and I won in Vienna, Austria. So aside from the back-to-back legacy, siguro I want my life to be a testimony na dreams do come true. Napaka importante Tito Boy na naniniwala ka sa sarili mo,” she said.

Angelia also admitted she is sad and excited at the same time to relinquish her crown to a new beauty queen this coming October 29. However, she hopes to be able to continue the advocacies she has begun with Miss Earth aside from pursuing a career in hosting.

“I’m ready for my next adventure,” Angelia remarked.