‘And kahit parang stranger siya sa akin, I see so much of myself in him,’ said Tony of his father Boom Labrusca. 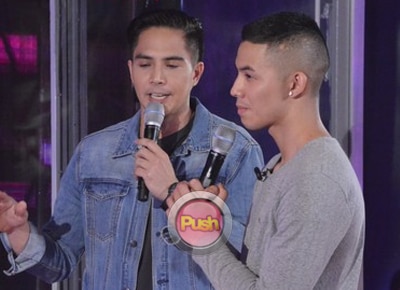 As it was his first time to hear his son sing, Boom was all praises for Tony who he said sings well and is very charming. “I just want to tell you, ang galing mo. I’m so proud of you,” he told Tony. The actor who is estranged from his son also thanked Tony’s mother Angel Jones for raising their son well.

Tony, for his part, said that he did not know how to react when he saw his father. Earlier, he said his last memory of him was when he was still a child. “I really didn’t know, parang ano talaga ‘yung dapat kong maramdaman kasi ‘nung first nakita ko ‘yung tatay ko, parang hindi ko maiiwas na he’s my blood. And kahit parang stranger siya sa akin, I see so much of myself in him,” he said.

Passing the audition, Tony won the judges’s four yes votes with the song, “You and Me.” He also impressed the female audience with his gymnastic skills, garnering 98% approval rating.