Jiro Manio thanks Ai-Ai delas Alas for ‘rescuing’ him

Jiro Manio asks forgiveness for inability to triumph over his depression. 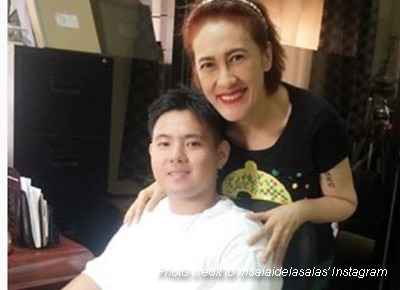 Embattled actor Jiro Manio couldn’t hide his gratefulness to his “mother” Ai-Ai delas Alas during the latter’s recent visit to him at his wellness facility.

In a report by 24 Oras on Friday, Jiro via the facility’s “guided dialogue” portion of the rehab program, was able to open up about his feelings to a close friend who took the time to visit him.

Ai-Ai recently took to her Instagram account to give an update about her “son’s” progress inside the facility.

The comedienne was the first one to extend a helping hand to the Magnifico actor after he was found homeless at the Ninoy Aquino International Airport (NAIA) back in July 2015.

In a separate post, Ai Ai shared a photo of Jiro dancing and participating in the rehabilitation facility’s activity.

Reports had it that Jiro had to battle depression a number of times. According to his foster father, the chief reason why he felt depressed was due to the fact that his supposed meeting with his biological father in Japan failed to push through