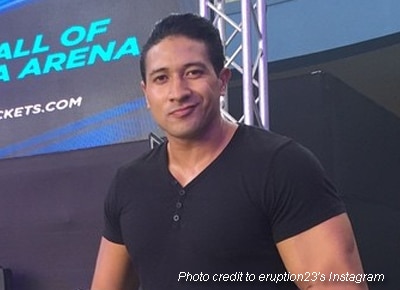 As one of the 11 competing teams in the newest season of AXN’s The Amazing Race Asia, Eric “Eruption” Tai and his wife Rona are one of the two pairs that ended up representing Team Philippines. When they first found out that they made the cut, Eric admitted he almost didn’t want to believe they were chosen out of thousands of applicants. "I was excited but sometimes with me I really wanted to confirm because the process to get in was the longest thing ever. They would call us, we would call back, they would ask details and they would confirm. And if we passed that process, there would be an interview and then a Skype interview. It was mahaba. Sobrang haba so we were like, ‘Let’s not get our hopes up until they say you are officially going to race in Amazing Race Asia.’ Until that happened we just couldn’t believe it. We were just very fortunate and blessed enough to be able to represent our country,” he shared during The Amazing Race presscon held last October 13 in Makati city.

After first meeting online four years ago, the now married couple said it will be religion that will help them get further in the race. Eric’s wife Rona had also declared that the $100,000 cash prize would go to getting an IVF treatment so they could have a baby. "We had that relationship with each other and with the Lord so it was the ground rin for going through a lot of trials as you will see soon. Hindi mahirap maiwasan yung mga pag-aaway so these things happen. But having experienced it now, it’s more mental than physical. You won’t be able to perform a challenge to the best of your ability if you’re not focused. If you’re not so focused you won’t be able to finish it or to finish where you want to be. So being in the race, it’s full of a lot of surprises,” Eric recalled.

Before leaving for their month-long adventure which takes them to different countries, Eric said he and his wife tried to prepare the best that they could both mentally and physically. He gives advice to all future aspiring applicants of the show. "Prepare well. Puzzles, quizzes, and all that stuff, do research on the country that you possibly might go to. Just general knowledge, know the languages. Learn the basics like how to say hello and how are you, where am I and how do I go to? And the single word for fast. So fast fast and bilis bilis, to know that single word in any language will help you a lot. Because you can get someone who doesn’t speak English,” he said.

The former It’s Showtime host also admitted that in the hectic pace of the race it is easy to forget when to eat. "You really have to bring your baon or pick up baon when you have an opportunity to purchase something, whether it be a drink, a chocolate, candy. Diet went straight out the window so we ate whatever we had available to give us energy for each challenge. Because you don’t know what you’re going to do, whether you’re going to jump off something or your going to swim somewhere or run for so long. You always have to refuel otherwise you’ll regret it,” he added.

After going through the whole experience, Eric also shared what was the hardest part about being in The Amazing Race Asia. “It was having no cellphones. We didn’t use a cellphone for a long time. We couldn’t connect with family, with friends, our followers and our fans so when we got back we didn’t know that they were rooting for us and they didn’t know that we were on the race. Another thing that was tough is for me, hitting the gym. So I missed hitting the gym for a whole month,” he admitted.

Watch The Amazing Race Asia season 5 every Thursday on AXN at Skycable channel 49.