REVIEW: ‘The Third Party’ shows audiences love for all genders

Angel Locsin returns to the big screen with her infectious charm. 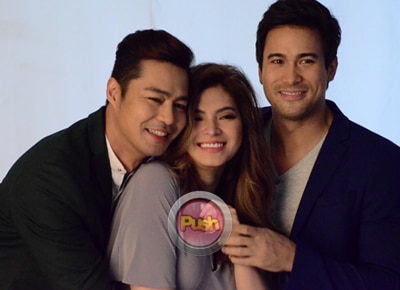 In director Jason Paul Laxamana's debut film with Star Cinema, the young director shows that people will continually search for love in all forms and genders. In The Third Party, Max (played by Sam Milby) and his high school sweetheart Andy (Angel Locsin) break up after graduation when their career paths force them down different roads. Angel Locsin is a refreshing sight after a she took a hiatus from showbiz and her outgoing character makes sure you’ll end up liking and relating to her in almost every scene.

Fast forward to five years later and the two exes meet up. But this time, Max introduces Andy to his new beau Christian (played by a very subdued and more formal Zanjoe Marudo). Unlike his previous gay roles in film, Zanjoe almost has us believing that he can be the epitome of the perfect boyfriend except when that bubble is burst whenever he utters the occasional gay slang words like "Chaka."

While it takes Andy a long process throughout the movie to accept that her ex has suddenly chosen to bat for the other team, she also undergoes personal struggles that almost everyone who has ever grown up in a dysfunctional family or relationship can relate to. Although the connecting factor in the story is Max, he is not the main focus, despite his constant inner struggle to accept or deny his blossoming bisexuality.

Zanjoe is a refreshing take on the third sex, playing the role of a pediatric oncologist who wants to adopt a baby of his own with calculated restraint and the right amount of masculinity that gets the audience "kilig" every time his body touches Sam's.

The Third Party might lead you to believe that there are three main characters here but the spotlight here is almost always on Angel Locsin. Whether she's trying to be coy and clueless with Sam, or playful and optimistic with Zanjoe, Angel's acting makes us wish she could come out with movies more often now that she's back to work. (Fun trivia: Watch out for Zanjoe's one-liner which hints at Angel's rumored next movie project.)