Kit Thompson talks about studying film in New York: ‘It has been amazing’

Kit Thompson is excited about the release of his new biking oriented movie ‘Lakbay2Love.’ 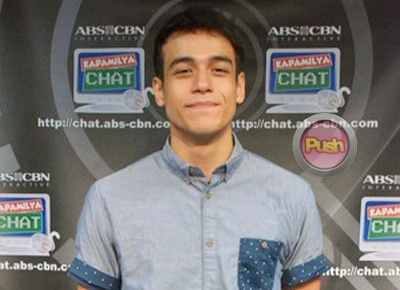 After entering showbiz through the ABS-CBN reality show Pinoy Big Brother Teen Edition in 2012 and then in the teleserye Forevermore, former PBB housemate said he is excited that his movie Lakbay2Love with Solenn Heussaff and Dennis Trillo will finally be shown in theaters starting February 3. "I am really excited about this movie, because for me this movie raises awareness. It tells you a honest story about our present day, the situations we face, and the consequences it will return if we do not take care of mother nature,” he admitted.
Filmed from February to September last year, Lakbay2Love features some of the most scenic biking locations in the country like La Mesa dam, Mt. Maranat, Timberland, Mt. Sinai, and Mt. Balagbag. In the movie, Kit plays Macky, a mountain biker who breaks up with his longtime girlfriend Lianne (played by Solenn). Dennis Trillo plays his biking mentor and old friend. During the shoot, Kit said he enjoyed doing the outdoor scenes a lot. "I really miss shooting in the woods. I also really enjoyed riding the dirt bikes going up the hill in my first day of shooting. Solenn and Dennis were very professional and easy to work with! The crew was great and Direk Ellen (Ongkeko-Marfil) really did a good job she was very passionate about this film. I hope to work with them again in the future,” he shared.
Currently studying at the New York Film Academy in the US taking up film, Kit said his US stay has been quite an adventure. "It has been amazing so far. I have learned a lot of different techniques like Meisner, Shakespeare, Improvisation, and Uta Hagen. Also I have been doing voice and movements classes and I learned how to edit and shoot scenes in film craft. I have been all around New York and it still feels like there is so much more to see! My life here is very different comparing with my life in Manila. I take the subway everyday to NYFA (Battery Park) from Brooklyn but I still enjoy it very much because culture here is diverse, it is amazing you can meet the whole world here. I have been to Empire state, One World Trade Center, Central Park, Brooklyn Bridge, and different museums. I love Central Park a lot and I also enjoy going to museums here,” he said.
With his movie aiming to raise awareness of the growing bike culture in the country, Kit said he was pleased to see that his current city also has a thriving biking community. "There are a lot of bikers here, they have groups here and these groups contain hundreds of members going around the city at the same time. It’s amazing to see these kinds of things. A large amount of New Yorkers ride their bikes to work and other places,” he said.
Having spent the holidays in the US, Kit says he can’t wait to go back and apply what he has learned in film school. “I miss dried mango! I miss the warm weather and great people! Also the food. I spent Christmas with my relatives from New Jersey. We had an evening with food and drinks. Last New Year's Eve I went out with my classmates and friends from the Philippines. We had amazing Mexican food and drinks. My friends here are also my family in New York. But when I return to Manila I plan to do what I love, act! And spend time with family and friends,” he added.
Watch Kit Thompson in Lakbay2Love showing in cinemas starting February 3, Wednesday. Also starring Solenn Heussaff and Dennis Trillo. Directed by Ellen Ongkeko-Marfil.
Celebrity