Pia hopes to speak with those who feel strongly about her answer during the 2015 Miss Universe pageant. 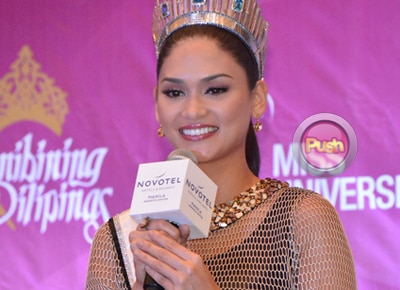 Despite raising a few eyebrows due to her answer during the Miss Universe pageant, Pia Wurtzbach maintains that having the US military presence in the country is fine.
Pia explained what made her answer the question the way she did during her homecoming press conference on Sunday, January 24.
“The reason why some people have some strong opinions on this is because it’s different when you’re sitting and you were watching it on TV and you were given time to think about the answer. You guys should take into consideration what it felt for me to stand there, hear the question and think of the answer right away,” she started.
The reigning Miss Universe stressed that her answer does not essentially mean that she is in favor of the reestablishment of military bases in the country.
“From what I understand, military presence is different from military bases. Military presence to me sounds like aid, military help, security. So for me, it didn’t sound wrong. So that’s why I’m sticking with my answer,” Pia said.
But Pia does not take offense on those who feel strongly about the subject. If anything, Pia expressed willingness to personally hear these people out.
“However, if some people are very strongly against it, I respect their opinion, and if ever they want to talk to me about their stand on it, I would gladly listen. I am open to listening to different kinds of opinion,” the beauty queen said.
It may be recalled that Pia got tagged as “Pro-American” by certain netizens, politicians and activist groups due to her response regarding the military presence in the Philippines.
“I think that the United States and the Philippines have always had a good relationship with each other. We were colonized by the Americans and we have their culture and our traditions even up to this day and I think that we’re very welcoming with the Americans. And I don’t see any problem with that at all,” she said during the Miss Universe top 5 question-and-answer portion.
Among those who reacted to her response was presidential-hopeful and anti-Visiting Forces Agreement advocate Miriam Defensor Santiago, who said that she would like to have a word with Pia.
Celebrity