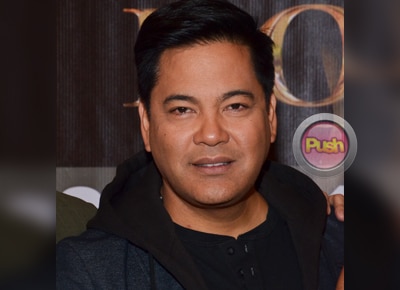 Concert King Martin Nievera ended 2015 with a fulfilled heart when he got his longtime Christmas wish.
During the press conference of his upcoming concert with Angeline Quinto, Erik Santos, and Regine Velasquez titled Royals, Martin opened up about the first meeting of his ex-wife Pops Fernandez with his son Santino.
Recent reports have Pops gushing about the occasion that happened last December 20 in Las Vegas.
"It was an event with friends and a lot of their kids. The changing of the guards moment was when she met Santino," said Martin.
While they did not talk about the meeting, Martin himself, couldn't help but wax nostalgic over the nice moment.
"When she said goodbye, that was the most touching part. When the kids said goodbye to each other and Santino wouldn't let go of his brothers, holding his brothers. She [Pops] began to cry. So, it was very touching to see that," shared Martin.
He continued, "I don't know how everyone will accept it but what matters is that my kids were together, which is all I wanted for Christmas. So, I got my wish."
What many do not know is that Pops has apparently been wanting to meet Santino for the longest time.
"Oh yeah, since he was born because all the pictures that I sent her during the early years of Santino. She would be like 'My God this looks like Robin' or 'This looks like Ram!'"
As years went by, Martin said Santino looked more like his two sons with Pops since "Malakas talaga ang dugo ko eh. So she can see both kids in Santino and so she wants our kids to be babies again in the form of Santino."
Will the said gathering be the beginning of an annual tradition?
"I think so, yeah. I told them every year that if anything happens to me. Make sure that you have to continue this. You have to continue this tradition because it's the only thing that my son [Santino] asks for," said Martin.
Apparently, the youngest Nievera is close to his two older brothers whom he calls "Kuya."
Meanwhile, as part of a Valentine's Day tradition, Martin is once again taking on the big stage with the Asia's Songbird.
This time, though, they are sharing it with Angeline and Erik, with whom they have performed together with for the first time during their concert titled KQ at The Araneta last year.
The two-day Royals concert will be at the SM Mall of Asia Arena on February 13 and at the Waterfront Hotel and Casino in Cebu on February 14.
Celebrity