Darren Espanto says that besides singing, he is also fascinated with acting. 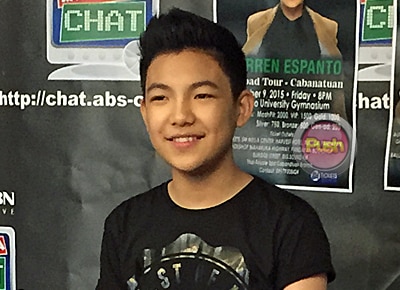 With the numerous opportunities that are coming his way after the first season of The Voice Kids, Darren Espanto remarked that he is overwhelmed by the success that he has achieved so far in the entertainment industry. “I feel blessed and humbled kasi hindi ko in-expect na ganito karami ang gagawin kong shows pagkatapos po ng The Voice and siyempre po may pagod po but it’s all worth it to see the people who are enjoying my performances and I just have fun when I perform,” he said in an interview with Push.com.ph.
The teen singer relayed that he is now working on his second album which will be more mature than his previous one. “Malapit na po ‘yan pero next year pa. It’s different from my debut album kasi ‘yung debut album medyo pa-sweet pa po ‘yung kanta, it’s till a mix of genres pero hindi siya kasing pang kids, ganon po.”
After successfully establishing his name as a young singer in the industry, Darren said that he wants also to venture into the other areas in showbiz, like acting. “Opo, yeah gusto ko pong ma-try din po ‘yung acting and I think it’s very fascinating to see the actor on how they can cry pag sinabi ng ‘action,’ on how they can laugh, ‘yun po.”
Darren shared that he looks up to Jericho Rosales and Coco Martin when it comes to acting. “Kasi talagang pag nakita niyo po ‘yung acting nila ikaw rin affected, parang nakakahawa rin po sila kahit through the TV lang and ang galling, parang true to life po eh,” he stated. On whom he wants to be paired with if ever he will star in a teleserye, he commented, “Kung sino po ‘yung ibibigay ni Mr. M (Johnny Manahan).”
With a rising career in the country, will his family be settling down back in the Philippines? “Right now we’re still based in Canada pero hindi ko rin po alam eh kasi my mom has to go back and forth to maintain her license as a registered nurse and my dad has to take care of my little sister there who‘s doing school and he’s also working at the same time,” he shared.
Darren will be having a series of concerts in the country and overseas. For this month, catch him on September 12, 2015 at Redwood City, California.
Celebrity