Kyla clarifies there is no competition among Erik Santos, Angeline Quinto, and herself in singing teleserye theme songs. 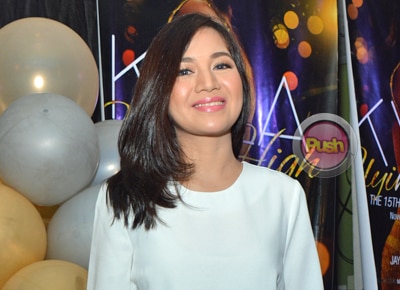 Kyla successfully dominated the charts and captured the hearts of the online world with her hit teleserye theme song On the Wings of Love. Now that she has made her mark in theme songs, the singer was asked if there is a competition that’s brewing among Angeline Quinto, Erik Santos, and herself. Both Angeline and Erik are known for their hit theme songs for the past couple of years.
“Ako po personally wala po akong nararamdaman na [competition] kasi I’m sure si Angeline at Erik sobrang dami na nilang nagawang theme songs more than sixty, thirty plus each, theme songs sila ni Erik at ni Angeline and sila naman [they] happily give way to other artist like me para makagawa ng theme song sa ABS-CBN. Walang competition sa amin, sobrang sa Cornerstone (their Management) magkakapatid kami doon and they are really nice people, [si] Angeline, Erik,” she stated.
The R&B singer stressed that she is not competing with anybody, but rather she is focused on putting her best foot forward in every project entrusted to her. “I don’t feel like competing with anybody especially sa mga kapatid ko sa Cornerstone because we are in a good relationship and we are in a good state right now and I am just doing my job and doing my best to interpret kung ano man ‘yung projects na they will offer me.”
With all the success that she is enjoying right now, Kyla is truly thankful to the Kapamilya network for all the opportunities that have been given to her. “I’m just really happy na kahit a few months pa lang ako, they already sent me to London, TFC shows, out of the country tour and binigyan nila ako ng chance kantahin ang On the Wings of Love na very successful and I’m so happy na gabi-gabi, naririnig nila ‘yung boses ko sa [Primetime Bida],” she said.
Kyla is now celebrating her fifteenth year in the Philippine music industry and she is set to stage an anniversary concert in November 20, 2015 at Kia Theater. “This will feel like a celebration, it’s like a thanksgiving para sa lahat ng mga tao who supported me, who listened to my music for fifteen years. We are very excited dahil gagawin namin lahat para ma-entertain lahat ng manonood ngayong November 20,” she said.
Celebrity