Have Kim Chiu and Xian Lim’s relationship gone up the next level? 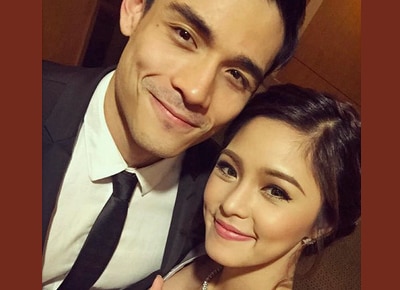 Today on Kris TV, host Kris Aquino, who is known to be very close with her Etiquette for Mistresses co-star Kim Chiu spilled the beans and shared Kim’s sweet moments off-cam with her on-screen partner and rumored boyfriend Xian Lim.
“Naghihintay si Xi na matapos siya [Kim] that was pa-four in the morning naghihintay sa phone na sabihin niyang ano, dahil ayaw matulog kasi daw it’s unfair na matutulog siya na si Kim was still working,” Kris revealed.
Kris appreciated Xian’s gesture and said, “This guy wants her to feel na I know you’re working this hard but   a, dinadamayan kita kahit malayo ako.” During that time Kim was in Subic to shoot for her film while Xian just arrived from Bangkok for a shooting.
Kim then told Kris that she feels lucky with Xian and “Mabait talaga siya as in sobra.” Kris teased the KimXi fans and said, “For all the KimXi fans, matutuwa kayo sa chika ko. Alam na alam ko lang talaga pag si Xian tumatawag kasi nagbubunot na siya ng lapel.”
Their co-star Claudine Barretto also added that during their tracking shot for the film, Xian was calling and Kim was hesitant to answer his call in front of her but she had no choice since they were in a car. Claudine added she heard that even though Kim was already tired from working and was eager to rest, she was willing to see Xian.
In the end, both Claudine and Kris were happy for Kim and commended Xian by saying his concern for Kim was genuine and not just for show.
Watch video HERE
Celebrity