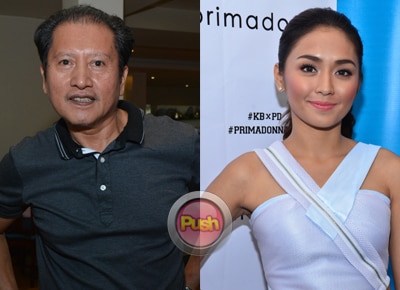 Apart from being part of the top-rated Primetime Bida series Pangako Sa 'Yo, veteran actor Ronnie Lazaro is also part of the historic biopic Heneral Luna which hits major theaters starting September 9. In the movie, Ronnie plays the role of Lieutenant Garcia, who is one of General Antonio Luna right hand men.
“It is a real character Lieutenant Garcia but then they give him a special task to do. He got to play a sharp shooter. It's an old rifle so it's how the rapport between the rifle and you become casual and normal. I am part of Heneral Luna's team. He was one of his trusted men,” he divulged to Push.com.ph.
As a multi-awarded actor, Ronnie admitted he cannot count anymore how many historic films he has been part of but said he will always want to keep doing these kinds of projects.
“You don't get tired of doing these things. I guess naturally I am also a nationalist by heart so I like to do something for my country and I want to be part of it. If I can be of help to keep our country in a better perspective of living here at this point in time why not?” he explains. Another aspect of the film he enjoyed was getting to wear historical costumes. “Yes I enjoyed it and it's the atmosphere itself. Your body is happy doing it. Kasi may bonding and somehow everybody is one. I guess it's the story itself. How often can one produce such a big film? And to be part of it is an honor,” he said.
With the countless accolades and a long list of accomplishments in the industry, Ronnie said he has no dream role but instead wants to step behind the camera again. The 57-year-old actor also wanted to share his thoughts on helping uplift the Pinoy movie industry.
“I wish I could direct again because I directed once. I wish I could do more work with ABS-CBN. I directed Edna, it was graded A by the Cinema Evaluation Board for my first project. I hope the government helps us especially the producers, maraming nasusunog na producers eh. Kasi it's so hard to market our product and the cooperation with the cinemas should also be that we help each other. It is a big industry and itong industriyang ito tumutulong naman sa tax sa bansa. So ang gusto kong suggestion lang ang puwede sanang mangyari gumawa naman tayo quarterly ng all-Filipino films ang mapapanuod natin. Hindi naman yun sapilitan pero of course it is the prerogative of the government to show that they want to help promote and bring back the moviegoers. Kasi marami pa rin ang hindi nakakapanuod ng pelikula na independent na magaganda dahil kulang lang sa advertisement. Let's help each other tutal nakikinabang naman lahat,” he shared. (continued on next page)
Ronnie is also currently seen in television for his role as Tatay Isko, the father of Kathryn Bernardo's character Yna in Pangako Sa 'Yo. The seasoned actor explained the two work experiences are very different.
“What can I say, one thing about my participation in the movie, I shot it in different days so may laktaw whereas for Pangako Sa Yo you are there daily so mahuhubog mo talaga yung role. At saka yung directors mo naman are helping you fine tune it so mag-be-blend kayong lahat. It's a nice working relationship on the set. But there's some twists coming up with Mang Isko's character. It's coming. It's going to be something familiar to those who have seen the original. We have a lovely vibe on the set. It's lovely. I feel young again (laughs),” he revealed.
Being on the set in Zambales all week for the hectic daily shooting of Pangako Sa 'Yo, Ronnie said he admires his younger co-stars professionalism on the set, specially Kathryn. “That poor girl. I think she not only loves what she's doing, she's really passionate about it. You don't hear her complain. You know how they bring her from one end to the other set for the sequences, but she still always manages to have a nice, cute smile. My Yna. (laughs),” he said.
Celebrity