‘Ex with Benefits’ stars Derek Ramsay and Coleen Garcia revealed why Solenn Heussaff and Gab Valenciano are the exes that made the most impact on their lives. 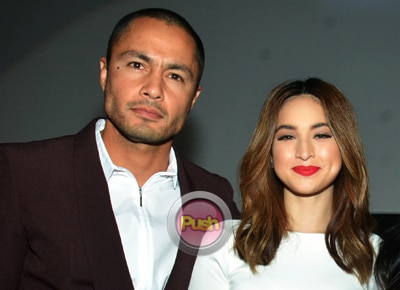 In an interview on The Bottomline with Boy Abunda, Ex with Benefits lead stars Derek Ramsay and Coleen Garcia talked about their exes who made the most impact on their lives.
“For me, they all had an impact because it takes a lot for me to get into a relationship. And in every relationship that I’ve had, I’ve had a lot of great memories. Yeah, there’s some pain but the great memories outweigh [them],” a hesitant Derek answered at first but eventually revealed that it was model-actress Solenn Heussaff.
“I would have to say it was Solenn. We were similar in so many ways, both half-Filipino, half-European, we both love to travel,” he admitted. Revealing what ended their relationship, he said, “Majority of it was long distance and timing…” Moreover, he shared, “My niece is named after her so that says it all.
“I’ve had to say it will be her. I think she brought out the best in me during the time we were together and she was very supportive of everything that I did,” Derek said about the actress.
Meanwhile, Coleen shared that hers was performing artist Gab Valenciano, the only serious relationship she had before getting in a relationship with her present boyfriend, singer-host Billy Crawford. “I feel like it left the biggest impact because it was such an intense relationship. By that, I mean the highs were very high and the lows were very low.”
She also cleared that her relationship with actor Enrique Gil was only puppy love. “We were always with family… We were pretty much neighbors… Our family members are still friends,” saying that the relationship was just light.
Nonetheless, she said that she learned so much from her previous relationship, “This last one kasi, I felt like it was so heavy and at the same time though on a positive note, I learned so much. It really shaped to be the person I am now and it taught me to be strong and to put myself first sometimes.”
Celebrity