Gary Valenciano admits he is partly at fault for son Gab’s thoughts about being worthless. 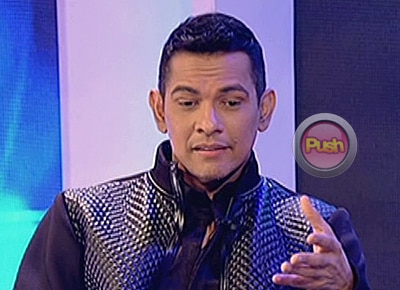 On Tonight with Boy Abunda, Mr. Pure Energy Gary Valenciano was asked about his reaction regarding son Gab Valenciano’s viral Facebook post saying that local show business made him feel worthless.
Gary admitted, “I know I played a fault at that because siyempre, as Gary Valenciano as his father, there are things that I could have done para maiwasan ‘yun but I’ve also seen what he’s gone through. I’ve also seen the pressure that he’s gone through and I assured him many, many times, Gabriel, I do not expect you to talk, walk, sing, dress up, look like me, dance like me. I don’t expect that. You have your own set of wings, use your wings to fly. I’ll fly with you, but I will not fly for you. So I told that to my three children,” Gary said, adding that he is proud of them.
More on his family, the Your Face Sounds Familiar judge was also asked why people are wrong about perceiving his wife, talent manager Angeli Pangilinan, as a kontrabida in the industry.
He answered, “Angeli has seen me in the worst of times… She’s there with me not knowing if I’m going to wake up from my diabetic, hypoglycemic attacks so because of that, she’s become very, very protective over my health, first and foremost. So minsan, hindi naiintindihan ng ibang tao kung bakit siya gano’n. I’ve always believed and I will say it again to everyone that my wife’s intentions are always very pure,” he said, later adding that a manager has responsibilities over his/her artists.
Meanwhile, Gary said that he did not hate on host Boy Abunda when he was the spokesperson/manager of singer Martin Nievera who was his fierce rival 30 years ago.
“Siguro I was brought up not to hate anybody regardless of kung ano man ang sabihin nila tungkol sa akin,” he said and acknowledged that Boy was only speaking out of what he sees.
Furthermore, he said, “For me, every time na nagkakaroon ako ng let’s say, negative comments tungkol sa akin, I used it as parang gasolina or fuel to be better.”
Celebrity