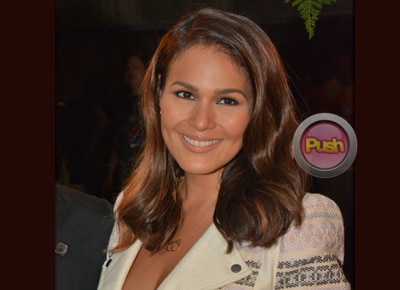 Even though they have yet to release their film, Etiquette for Mistresses, Kris Aquino, Claudine Barretto, Kim Chiu, Iza Calzado and Cheena Crab are already getting a huge amount of publicity. Along with this comes certain criticisms, on top of them is the speculation that the film would condone mistresses.
To dispel such negative news, Iza, at the launch of Samsung Galaxy Note5 and S6 Edge+ last Tuesday, confronted the controversy head on.
“Hindi natin sinasabing fun siya,” she began.
“Actually ang dami ngang pinagdadaanan ng mga characters na hopefully you’ll feel for them also and then you’ll realize that they just happened to make that decision for themselves na pinanindigan lang,” Iza continued.
Iza rationalized that people tend to be too judgmental over the women getting tangled with extramarital affairs.
“Bakit hindi naman ‘yung lalaki ang ija-judge natin dahil siya din naman ang nag-decide na gawin ang ganon? Diba it takes two to tango? So it’s not just the woman’s fault but it’s always viewed as such,” she noted.
She even underscored how women tend to get most of the misfortune after an illicit affair because “It’s just the way society works. It’s such a shame but it’s a reality.”
With their movie set to be released before the month ends, Iza claimed that filming with the four other actresses has been such an interesting experience. Despite being different people, individual ego and popularity never became an issue among them.
“Alam mo honestly let’s give it to the biggest one, Kris Aquino. Ate Kris I love the work ethic. She doesn’t throw her weight around in a way na ipaparamdam niya sa ‘yo na she’s the most powerful one. Hindi eh,” she described.
Turns out that Etiquette for Mistresses was the first project that Iza was able to work witj the Queen of All Media.
“Dati Kris TV lang o kaya guesting na mabilis lang. One time nakasama ko siya sa isang charity event. Pero iba kasi ‘yung nagtatrabaho kayo. Susuportahan ka niya. Parang hindi siya threatened sayo. Nakakatuwa kasi secure siya sa talagang puwesto niya sa industriyang ito,” she claimed.
The same goes for her three other co-stars Kim, Cheena and Claudine.
Despite being Claudine’s comeback movie, Iza shared that the veteran star didn’t become rusty at all.
“And ito naman nagbabalik nga si Ate Clau rin and of course marami siyang fan. Magaling siyang aktres. Talagang ang respeto ko sa kanya as an actor is really high up there. She’s a star of the star. ‘Yun ang tingin ko sakanya,” she ended.