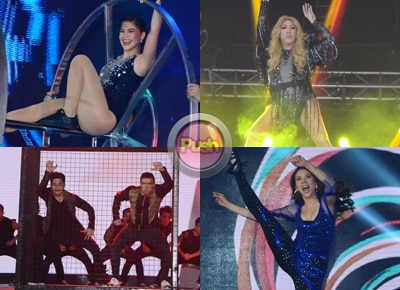 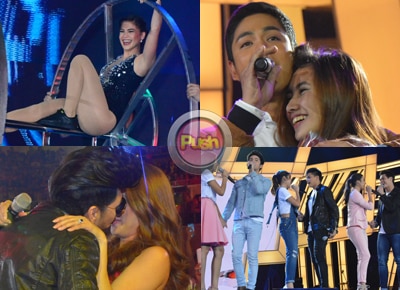 The It’s Showtime sixth anniversary celebration at the Araneta Coliseum closed on a happy note as it was packed with breathtaking performances and show stopping moments that our Kapamilya viewers enjoyed. Here are the top five highlights of the show that kicked off Showtime’s 6th Anniversary:
1. It’s Showtime opening number
The It’s Showtime hosts really know how to put on a show as they opened the event with breathtaking stunts and thrilling production numbers. TV hosts Vice Ganda and Coleen Garcia danced in mid-air while everyone’s jaw dropped as Anne Curtis rolled on stage aboard a huge wheel for her performance. Meanwhile, Billy, Vhong and Jhong got loud cheers and screams from their fan girls as they grooved and moved to the latest dance moves. Kuya Kim, Karylle, Eruption, Ryan Bang, Jugs and Teddy also impressed the crowd with their performances.
2. Vice Ganda kissed a surprised Karylle 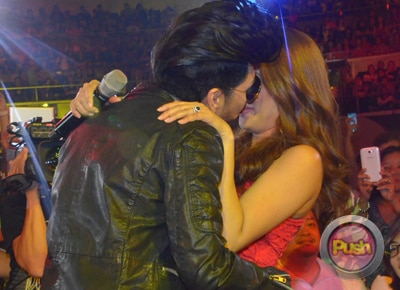 It was the moment ViceRylle fans have been waiting to happen since the love team of Vice Ganda and Karylle was formed. The crowd went wild when Vice Ganda as his alter ego Viceral, kissed Karylle during his production number. In the middle of the performance, Vice kissed Karylle on the lips, which caught the latter by surprise. In an interview with Vice backstage, he shared that it was all spontaneous saying, “For the fans ‘di ba? Hindi [pinlano].  Natawa siya. Tawa kami ng tawa.”
3. Jadine, KathNiel and LizQuen perform together in one stage It was one television moment that fans would never forget as James Reid-Nadine Lustre, Daniel Padilla-Kathryn Bernardo and Enrique Gil-Liza Soberano tandems sang together on one stage. The Big Dome was filled with the loudest cheers and yells among fans when the Kapamilya love teams appeared on stage. Prior to their performances together, each love team also had their own song numbers. JaDine performed “On the Wings of Love”, KathNiel sang “Pangako Sa’yo” and LizQuen performed “Forevermore”. Because of the kilig vibe inside the Araneta Coliseum, KathNiel fans even cried when their idols stepped out on the Showtime stage.
4. Coco Martin serenades Pastillas Girl Pastillas Girl got so kilig while she had a nose-to-nose moment with Ang Probinsyano lead star Coco Martin while he serenaded her. Coco brought red roses for the social media star and gave her love advice. The king of drama also asked Pastillas Girl, “Kapag sumali ba ko, may pag-asa ba ako?” making her and crowd even more kilig.
5. Claudine Barretto’s first guesting in It’s Showtime 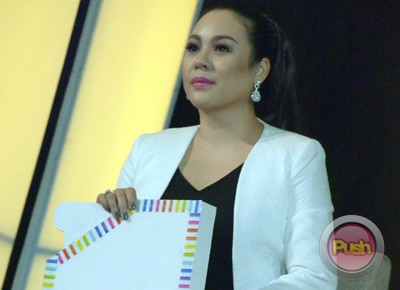 Claudine Barretto was all smiles in her very first TV guesting on It’s Showtime. She and Etiquette for Mistresses co-stars Kim Chiu and Iza Calzado were hurados for the Clash of Celebrities and Lip Swak segments of the show. The actress was beyond ecstatic to appear in the show. “It’s so fun kasi napapanood ko lang siya sa TV siyempre pero iba ‘yung nandito ka tapos kasama mo yung madlang people sina Anne, Vhong, Billy, Karylle, Vice and lahat, nakakatuwa,” she said.
Celebrity