Epy Quizon asks: ‘What have we been teaching in our history classes?’ 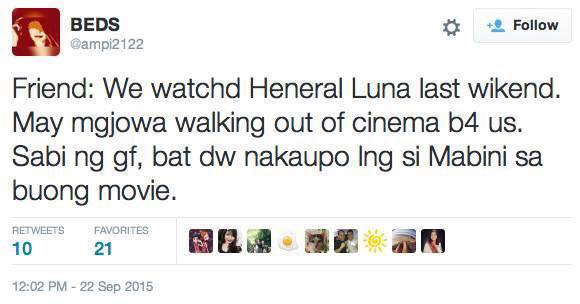 Despite the continuing box office success of their film Heneral Luna, actor Epy Quizon seemed unhappy about persistent comments about his character Apolinario Mabini.
A certain tweet about Mabini “not standing up” in the film has been circulating on social media lately. The said tweet has earned various negative comments from netizens.
In Philippine History, Mabini is known as the “sublime paralytic” for being the brains of the revolution. He served as the first prime minister to Emilio Aguinaldo’s revolutionary government. The accomplished lawyer performed all his revolutionary and governmental functions despite being tied to a chair after losing the use of both his legs due to Polio.

The film starring actor John Arcilla which was directed by Jerrold Tarog is set to represent the Philippines in the 2016 Oscars under the Foreign Language Film category.
This film has been a hot topic on social media platforms lately due to the good feedback that it received from moviegoers. Its popularity on the internet went far and wide, so much so, that netizens started an “online revolution” of sorts by campaigning for it to stay in the cinemas.
Celebrity