Sheryl Cruz stated that her cousin running for office is too abrupt. 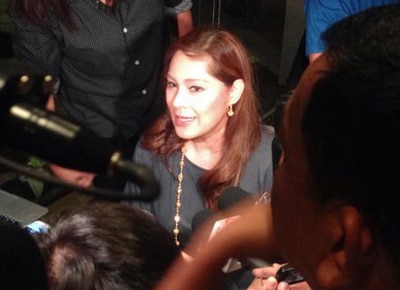 Sheryl Cruz voiced out her opinion regarding her cousin Grace Poe’s decision to run for president in the 2016 election. During “Bandila’s” report at the press con of the movie “Felix Manalo” yesterday, September 22, she told the press that she doesn’t support Grace in her candidacy.
“Ang feeling ko it’s just too abrupt, it’s just too early. Kung mas marunong nga na senator na si Serge Osmena who’s worked closely with my cousin ang sinabi nga niya she would make a fine president just not right now,” Sheryl said.
“I’m not belittling her capabilities, it’s just that she would be a more effective president come 2022 and not 2016,” she added.
She also denied that there’s a political agenda behind her statement.
“I’m not here for anybody’s gain, somebody’s political agenda or career. Walang nag u-udyok sa akin para gawin ito I have my own conscience. You know what, masyadong mataas ang talent fee ko para ako’y udyukin nila.”
She also admitted that she’s being hurt with the involvement of her mother Rosemarie Sonora, who’s the younger sister of Grace’s mother Susan Roces, in the issue of the senator’s parentage. There have been rumors that Grace is the daughter of Rosemarie with the late ex-President Ferdinand Marcos.
“Ang mama ko pwedeng magsalita but just because gusto rin niya na to keep the peace in the family that’s why hindi rin ‘yun nagsasalita. I’m not breaking that peace; it’s just that I am a biological daughter to my mom at kung walang nagsasalita in defense of my mom,” she explained.
She also hopes that her aunt Susan would understand her opinion with regard to Grace’s decision.
“My aunt always respected our views and opinions. We may have different opinions of each other but at the end of the day, pamilya pa rin kami at blood will always be thicker than water," she said.
Celebrity