Pokwang and Gerald Anderson speak up on recent 'battles' 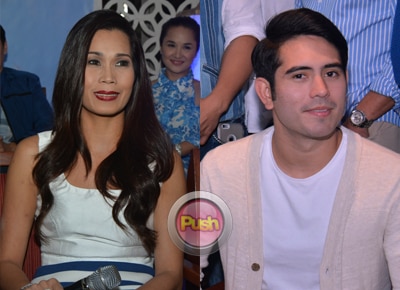 With the upcoming finale of their primetime soap Nathaniel, lead stars Pokwang and Gerald Anderson let their guards down and opened up on their recent "battles."
Pokwang, during the show's finale press conference, was rather indirect about her recent troubles after the entire cast was asked by the press which "battles" do they want to lift to the Lord.
"Okay na ako naka-move on na ako. Ni-lift ko na kay Lord ang pinagdaanan ko. Binigay ko na sa mga angels. 'Yun 'yung pinagdaanan kong 'yun. May reason kung bakit pero binigay ko ba sa taas ang lahat lahat," she said.
Pokwang, as confirmed by her boyfriend Lee O'Brian, recently suffered a miscarriage.
Gerald, for his part, shared that he continues to pray for his improvement as an individual.
"Siguro 'yung self-improvement meron pa po akong iniisip na klase ng tao na gusto kong maging, the kind of man that I want to be and wala pa ako doon," said the actor. "Wala pa ako doon and so I pray everyday for that."
However, Gerald also interestingly added that he's also praying for forgiveness.
"Forgiveness kahit hindi ko sinasadya or gusto for hurting other people and for hurting myself. 'Yung nilagay ko 'yung sarili ko sa sitwasyon na sobrang hirap. So siguro 'yun forgiveness and the strength to forgive and sana mapatawad ako," he said.
Gerald was in the spotlight for his surprising breakup with girlfriend Maja Salvador. Recent reports quoted them as saying that they were both "destroyed" by their split.
Gerald and Pokwang are both part of Nathaniel which is set to air its finale episode on Friday, September 25.
Celebrity