Pauleen Luna believes that it was God who changed Vic Sotto's mind about tying the knot. 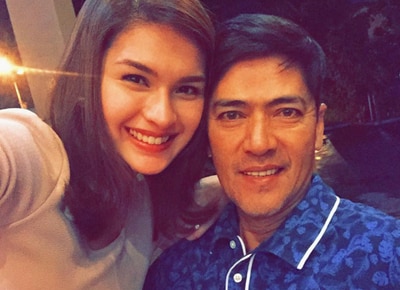 For the first time since they got engaged, actress Pauleen Luna finally revealed the story of how her boyfriend Vic Sotto popped the question.
During an interview on Kapuso Mo Jessica Soho over the weekend, the actress-host described the veteran host's proposal as "simple."
"You know, it's very simple… nothing grand, just the way we liked it. Kasi, kami po, very low-key kami. We like to keep our relationship simple. One day nilabas niya lang [ang ring]. Tapos, nagulat ako. And then, sinuot ko, actually, sa sobrang excited," she said.
She continued, “Sabi niya, you like it? Then sabi ko, ‘Oh my gosh! E ‘di sinuot ko. Sabi n’ya, ‘teka, ako dapat ang magsusuot sa'yo niyan…’ Then, sabi niya, 'Will you marry me?' And then, that's it."
Although rumors of their engagement began surfacing when Pauleen was once seen wearing a ring on their noontime show Eat Bulaga, the speculation was further bolstered by her acting mentor Beverly Vergel's Instagram post.
It was Vic who finally ended the speculations and confirmed that they are indeed engaged.
After which Pauleen posted a photo of her engagement ring on her Instagram account. A little later she posted photos indicating the start of her preparation for their big day.
Meanwhile, Pauleen, like Vic in an earlier interview declined to reveal the date and the venue of their upcoming wedding. However, an interview with Pauleen's manager Lolit Solis revealed have it that they are tying the knot this coming December at the couple's own house in Laguna.
Ever since he and his former wife Dina Bonnevie separated in the ‘90s, Vic never remarried but was linked to a few women including their noontime show co-host Pia Guanio.
How was she able to get Vic to settle down?
"I really don't know. I think it's really God. Prayers talaga. It works. And, you know what they say, God changes the hearts of people... I think, ang Panginoong Diyos lang po talaga ang nagbigay nito sa amin," she said.
Pauleen continued, "Kasi, he's had many relationships before pero with our relationship, it's very effortless. I think, kasi we've reached that point where we both know each other very well."
In fact, according to Pauleen they seldom fight "Because I think, ‘yung fact na alam na namin ‘yung makakapagpagalit sa isa't isa, iniiwasan na lang po namin."
The two were in a relationship for almost four years before Vic proposed to Pauleen.
Main photo credit to pauleenluna IG
Celebrity