Arjo Atayde reacts to being compared to Coco Martin

Arjo Atayde says he considers Coco Martin as his mentor. 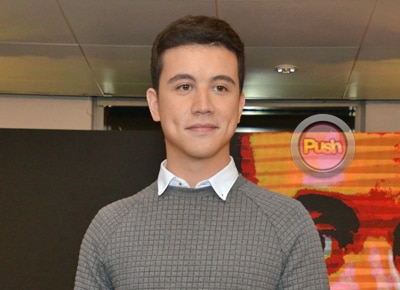 Arjo Atayde is set to star in the upcoming ABS-CBN series FPJ’s Ang Probinsyano. Despite the pressure that he feels about starring in the said project, the actor is thankful that his co-stars Coco Martin and Albert Martinez are guiding him along the way.
“’Yung isa sa hindi ko maiiwasan eh ang kabahan. Kahit sino ang kaeksena ko dito, kakabaahan ka talaga and you have to be prepared always. Actually ‘yung kaba ko nawawala kapag tinutulungan ako ni Coco at ni tito Albert. I consider them two of my mentors so ang dami ko pong natututunan so kahit kabado, I’m thankful na sila ‘yung mga nakatrabaho ko,” he said.
At one of the provincial events of the soap in Naga City, Arjo was introduced by Coco as “the best actor of his generation.” With this compliment from the teleserye king, Arjo remarked that he feels honored by such commendation about him.
“Of course sobrang overwhelmed ako kasi nandon po silang dalawa sa stage, ang CocoJam (Coco Martin and Maja Salvador), in-introduce niya nga po ako. I was actually really thankful and overwhelmed, sobrang saya. Coming from Coco, a brilliant actor as well, it’s an honor. As I said, he’s one of the people who I look up to as my mentor. Pagnag-uusap po kami ni Coco, kasi ‘yung feeling ko ‘yung alam ko na, mas nadadagdagan pa,” he stated.
Arjo will be playing the role of Police Insp. Joaquin Tuazon. He will be the kontrabida in the life of Coco’s character in the soap. Some could not help but compare him to the actor and Arjo stressed that such comparisons should not occur. “I don’t think you can compare Coco and I because Coco is Coco, I’m a newbie, I’m still trying to work my way up there. Let’s see where my path goes as of now. I think there’s no comparison that should happen actually because Coco is Coco,” he stated.
Celebrity