Maxene Magalona admits she felt ‘kilig’ when she recalls how she and her boyfriend connect. 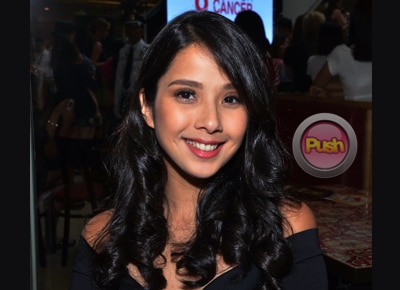 Celebrity sisters Maxene Magalona and Saab Magalona-Bacarro advocated Matrix’s 8-inch Cut for Cancer challenge last Saturday, September 19 at SM Megamall’s Mega Atrium. A minimum of 8 inches of hair were chopped off from each participant which will be turned into wigs to be given to children with cancer.
According to Kapamilya actress Maxene, the cause is very close to their heart considering that their father, Master Rapper Francis Magalona, died of cancer in 2009.
“This is a cause very close to our hearts because we know how it feels like to lose a loved one because of cancer. It’s really, really very hard lalo na the patients themselves. Kung yung family members nga nahihirapan, what more the patients, di ba?” she said, sharing that the kids would lose hair because of chemotherapy thereby affecting their self-esteem.
Maxene, who was also the ambassador last year, cut 10 inches off of her hair around September of last year. This year, it was her sister Saab who cut her hair short. “I feel like parang I’ve grown up into a more mature woman and I feel like I found my confidence. Because it’s not just about the way you look but the way you carry yourself and the things you do… It makes me feel so much lighter having short hair,” she said about her new hairstyle.
Meanwhile, Maxene who recently revealed on Aquino and Abunda Tonight that she is now in a relationship, talked about how she met her boyfriend Robby Mananquil.
Saying that she goes to the gigs of her sister’s band a lot, she began, “Because of those mga music events, I get to see him around kasi he’s also from a band. He also has a band, the name is Pulso. And ‘yun, nakikita ko siya tapos parang crush ko na siya dati pa. Alam ni Saab ‘yun tapos ‘yun, biglang he randomly messaged me online and there, I mean things started. We really connected.”
Explaining why she would suddenly giggle in kilig, she said, “Kasi pag naaalala ko lang, it was so easy the way we talk and the way we connected.”
“Ang galing niya kasi ang dami niyang manliligaw tapos sobrang hindi niya pinapansin,” Saab said about her sister who was single for more than a year before her relationship now.
“Kasi sabi ko, if I don’t feel like if there (isn’t) any spark or hindi ako kinikilig, I don’t think it would wise to give time to that or to focus on that when I should be focusing on myself lalo na when I was single parang I wanted to really work on myself. I mean I’m still a work in progress, we all are. I just think that I owed myself that time to just be by myself. And wala rin naman talagang kilig so hindi na lang. And then yun, when he was the one who messaged me, definitely I really felt kilig,” Maxene concluded.
Celebrity