Once upon a Twitterserye: Pastillas Girl’s journey to forever Gone are the days when television is the only means to make someone famous. Last week, a short video clip made the rounds on the internet. The same video was uploaded on a viral Facebook Page, which made it garner more views, even reaching to more than 2 million.

Angelica clarified in her Facebook account: "(this is just a request guys i'm not pertaining to anyone this is scripted we made this out of fun i just had to act it out so it would be realistic naman sorry na mass com student eh i need to be in character but thanks for sharing tho this is for those who have "hugots" and have fun!)."

After this sudden rise to fame, she appeared on It's Showtime's segment "adVice Ganda" on September 11, Friday and asked for advice about her ex-boyfriend who is now dating her best friend.

Close to tears, Angelica narrated how she tried to move on from the whole thing. As it turns out, the man behind the pastillas story may not be real but the hugot could possibly come from that deeply-rooted feeling.


THE SEARCH FOR PASTILLAS BOY

The following Monday, September 14, Angelica returned to It's Showtime and, this time, Vice Ganda began the search for Pastillas Boy.

The segment caused the noontime show to make a buzz on Twitter. Its hashtag, #ShowtimeUnliGV ranked first in both Philippine and Worldwide trends.

Also, Jess, who came all the way from Bacolod, made it to the show right before it ended. “’Nung napanood ko po kasi si Pastillas Girl ‘nung Monday, nakita ko talaga ‘yung kagandahan niya at saka wala eh, nakita ko lang siya sa TV, na-in love talaga ako sa kanya,” he said. Jess also acknowledged that they still have to get to know each other more.

The day’s hashtag, #ShowtimePastillas was on Twitter’s top spot even hours after the show.

As the days went by, Pastillas girl continued getting to know her suitors, Topher and Jess. Netizens even dubbed the two as “Destiny VS Forever.” 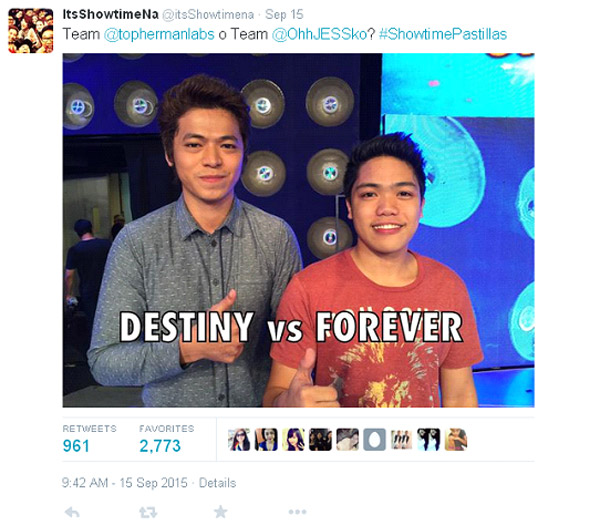 However, the search for Pastillas Boy intensified as Evan, a third admirer surfaced.


GETTING TO KNOW TOPHER, JESS AND EVAN

In order to help Pastillas Girl choose her Pastillas Boy, It’s Showtime decided to get to know the three suitors through their loved-ones.

Giving their best foot forward, the three suitors are determined to get the ‘yes’ of Pastillas Girl. In fact, in an exclusive interview with PUSH.com.ph, they revealed how they plan to pursue her.

In an exclusive interview with PUSH.com.ph, Pastillas Girl admitted that she did not expect her pastillas hugot video to become viral. She also confirmed having moved on from her previous relationship.

However, while Pastillas Girl continues to earn popularity and supporters, issues about her surfaced online as well.

September 18, on the 5th day of Angelica’s search for Mr. Pastillas on It’s Showtime, Topher, Jess and Evan were given a chance to have a date with Pastillas Girl in the dressing rooms backstage. She will then choose who among the three she wants to get to know further.

In the end, she decided to go on a date with Topher.

Is Topher the one for Pastillas Girl?

Stay tuned to It’s Showtime as the Pastillas Twitterserye continues to unfold, weekdays at 12:30 PM and on Saturdays at 11:30 AM on ABS-CBN.