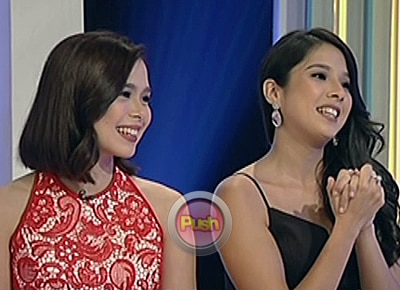 On Aquino and Abunda Tonight, Magalona sisters Saab and Maxene said they are both happy with their love lives.
Maxene confirmed she and Robby Mananquil are “together.”  Maxene added, “he makes me happy and he makes me laugh. It's the simplest yet most meaningful relationship I’ve ever been in.”
Saab, on the other hand, has been married since January this year and she said part of her wedding vow to her husband Jim Bacarro was “If dad was alive, he would have been so happy that I married (you).” Saab shared that like her dad the late rap icon Francis Magalona, Jim is also “makulit, super funny and he’s also a musician.”
The sisters are also encouraging everyone sporting a long do to donate at least eight inches of their hair to an event called “Cut for Cancer.” The donated tresses will be made into wigs and given to kids with cancer. Participants will also be given free haircuts.
Maxene and Saab explained that kids with cancer suffer more because “they find it hard to understand what they are going through.” Maxene said that when the kids’ hair falls off, it affects their confidence and “it breaks their spirit.” She also shared that having wigs to wear gives them joy and makes it easier for them to undergo chemotherapy. As Saab put it, “it’s confidence boost to be able to fight the disease.”
“Cut for Cancer” will happen on September 19, Saturday, at the SM Megamall Atrium. Those who are unable to go to the event may also put their hair into ponytails, cut at least eight inches of it, and donate it to any David’s Salon branch.
Celebrity