Daniel Matsunaga assures that his girlfriend is fine after the incident. 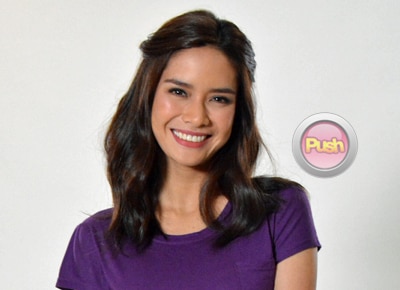 While shooting a scene of “Be My Lady,” an upcoming show that stars Erich Gonzales and Daniel Matsunaga, the actress got into a minor motorcycle accident that made Daniel and everyone on the set worry.
Erich had to shoot a sequence, driving a pedicab motorcycle in the middle of a rough farm road but she lost her control when the motorcycle’s wheel got stuck in a hole.
“It was a dead end, narinig ko si Direk ‘o si Erich! Si Erich!’ sabi ko ‘bakit ganon anong nangyari’ so pumunta ako sa labas pumasok ‘yung motorcycle sa butas, ‘yung gulong. Siguro nahulog siya,” Daniel told Bandila.
When asked about her girlfriend’s condition after the accident, he assured every one that she is fine and said, “Yeah she’s fine, she can smile.”
After the accident occurred Daniel was quick to assist Erich and gave her first aid. She had minor bruises and her legs got swollen which made it difficult for her to walk.
On another note, despite the numerous marriage proposals and engagements happening in show business, Daniel said that they’re not yet in that stage but hopes to settle with Erich in God’s perfect time.
“Naku hindi pa. Sana, sana. Sana soon! We’ll never know, in God’s time,” he answered.
“Be My Lady” will be aired before the year 2015 ends.
Celebrity