Taylor Swift and Nicki Minaj put the Twitter feud to rest with their VMA performance. 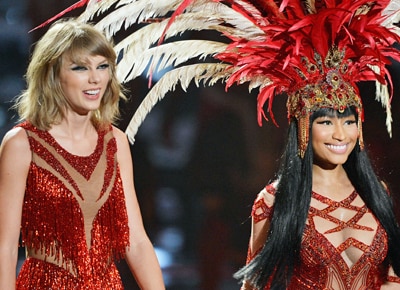 All is well between Taylor Swift and Nicki Minaj. The two pop stars surprised everyone when they both performed together in the opening number of 2015's Video Music Awards last Sunday, August 30, 2015 (US time). Both were involved in a Twitter feud in July.
After singing "Trini Dem Girls", Nicki performed her hit song "The Night Is Still Young" with Taylor during the VMAs. They also sang the chorus of Taylor's hit song "Bad Blood" before ending the breathtaking performance. They hugged it out after the performance which finally put the Twitter feud to rest.
Taylor and Nikki were involved in a Twitter war last July after the latter questioned VMAs decision of not nominating her “Anaconda” song under the Video of the Year category. "When the ‘other’ girls drop a video that breaks records and impacts culture they get that nomination. If your video celebrates women with very slim bodies, you will be nominated for vid of the year,” Nicki tweeted.
Taylor took offense over Nicki's tweet thinking she was one of the artists whom Nikki was addressing. "@NICKIMINAJ I've done nothing but love & support you. It's unlike you to pit women against each other. Maybe one of the men took your slot,” Taylor posted. Nikki replied, "Huh? U must not be reading my tweets. Didn't say a word about u. I love u just as much. But u should speak on this. @taylorswift13. I'm still confused as to why u just tweeted me when I made it abundantly clear.”
A few days after, Taylor apologized to Nicki. "I thought I was being called out. I missed the point, I misunderstood, then misspoke. I'm sorry, Nicki. @NICKIMINAJ," she posted.