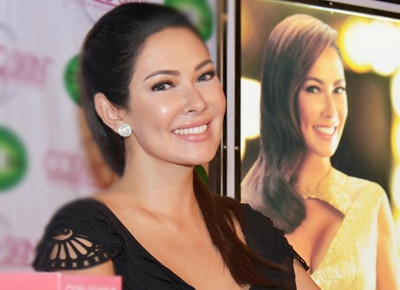 Ruffa Gutierrez has evidently moved on from her past with John Lloyd Cruz as she shared the screen with him recently for the show Home Sweetie Home.
It was early last year when Ruffa made a cameo on the weekend sitcom, portraying the role of John Lloyd's character Romeo's former flame.
In an interview at the recently-concluded launch of her endorsement Cosmo Skin collagen drink at the Raffles Hotel Makati, she expressed openness to work with the box office-hit actor again in another project.
The It Takes Gutz to be a Gutierrez star pointed out that the very reason why she wants to work with John Lloyd is because he's an "excellent actor."
"I learn a lot from him, especially sa kahusayan niya bilang artista," she said.
Ruffa stressed that they have let bygones be bygones since the ending of their short-lived romance in 2011.
"Nagkaroon kami ng bumps sa aming friendship a long time ago pero matagal nang naayos 'yon. As of now masasabi kong wala talagang problema whatsoever, walang ilangan at all. Nagpadala pa nga siya ng manok eh," she said.
With Ruffa in a relationship with businessman Jordan Mouyal and John Lloyd in a relationship with actress Angelica Panganiban, Ruffa is confident that working together in the future won't be an issue.
"I know Angelica and there's no problem whatsoever," she said adding that she knows Angelica.
"Alam ko naman na malawak ang pag-iisip niya and if ever na gagawa kami ng project (ni John Lloyd), project lang talaga. I don't think she is the type na selosa," she added.
Celebrity