James Reid would like to fly Nadine Lustre to Greece 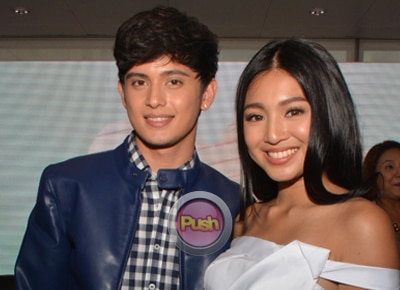 On Aquino and Abunda Tonight, On the Wings of Love stars Nadine Lustre and James Reid answered Fast Talk questions from host Boy Abunda.
James said if he had wings he would go to Greece and bring Nadine with him. Nadine would go to the sky so she could touch the clouds. She would bring James with her because, on an airplane, he would always stick out his tongue and pretend to lick the window and say, “So that's what clouds taste like.”
James said the wind beneath his wings is his dad, while Nadine said it is her family. Asked if angels have wings, James said yes and Nadine said it depends because there are angels that walk the earth.
If they have wings, Nadine would “fly” and James would “fly higher.” If they could give wings James would give it to his dad and Nadine would give it to her sister. Love, for Nadine, is “unconditional” while James said jestingly that it is “when you run out of words.”
Asked to make a choice between love or money, Nadine and James chose love. But both opted for career when they were made to choose between love and career.
James said the worst thing about love is that “you can lose yourself” while Nadine, said the best things about love is that her “family giver her strength.”
If they have the power to make someone fall in love with them, James said it would be Hollywood star Angelina Jolie because she was his crush since he was a small boy. Nadine, meanwhile, chose English actor Tom Hardy.
Celebrity