Iza Calzado admits she really wanted a foreigner for a boyfriend 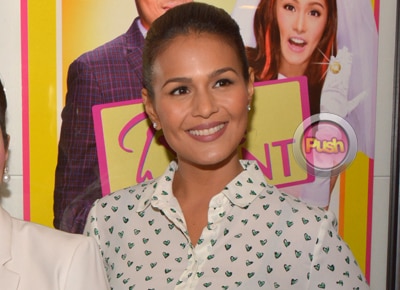 Iza Calzado and her British boyfriend Ben Wintle, who is a co-founder of the app “Booky”, talked about their relationship on Kris TV last Tuesday. They shared how they met and how things worked out for them when Ben leaves the country from time to time.
“Actually just before Ben tapped me on the shoulder, I saw him siguro mga ten minutes before that sabi ko ‘Sino yun, gwapo?’ Heartbroken ako noon. That was the first night that I told myself na I'm going to stay out, socialize, mingle, and hopefully meet somebody. I was really looking for a foreigner that night kasi I've never dated a foreigner,” she shared.
Iza said that Ben was trying to ask her if he can add her on Facebook and she said, “You know what, let's not complicate things. Just get my number.”
Iza also added that her father Lito Calzado even met Ben before passing away. During that time, they were still casually dating. Cherry Pie Picache, another guest from the show asked, “Approve naman kay Dad mo?” Iza answered, “Oo naman, parang ngumingiti lang si Daddy. Wala nang masyadong energy si Daddy ‘nun e.”
When Iza’s father was admitted in the hospital in 2011, Ben was already by Iza’s side.
“He was there for me. He was very strong, patient kasi nga gulong gulo pa ako noon," she said.
When Ben goes out of the country, they talk on a messenger app but he clarified that most of the time he’s just gone for about two weeks.
When asked about marriage, Ben replied that he and Iza are “both very career focused.” “I'm focused on Booky, she's just focused on her career. So in terms of timing, I would say it's kind of similar at the moment."
The two have been together for almost four years.
Celebrity