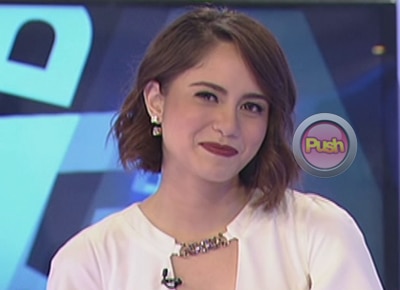 On Aquino and Abunda Tonight, Jessy Mendiola said work doesn't come between her and boyfriend JM De Guzman. She said, “It’s work and maganda ang namimiss din (namin ang isa’t isa.)” Luckily, she and JM always get to see each other before they celebrate their “monthsary,” which they celebrate on the first of every month.
JM also makes it a point to give her flowers on their monthsary wherever she is. Meanwhile, Jessy gives JM little stuff like a ball pen or a necklace engraved with his name.
On Fast Talk, Jessy said the last thing she said to JM before her interview is “I love you baby.” And if he proposes to her on the last day of the world, Jessy would say “yes.”
Jessy said she doesn’t mind playing third wheel to Kim Chiu and Xian Lim in Must Date the Playboy, the first ever Kapamilya mobile movie. Jessy said she’s always wanted to work again with Kim. She also said Kim and Xian started their acting career earlier and she looks up to them.
Jessy reiterated that playing third wheel is not a problem because the story would not be complete without it. She adds, “I want to work with different actors and have different roles.”
Celebrity