Marvin Agustin and Jolina Magdangal want to do a movie together 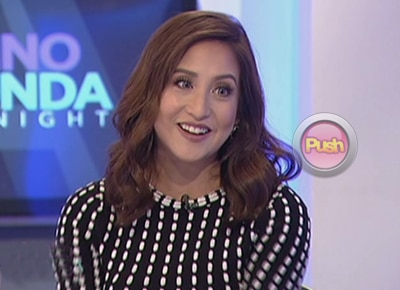 On Aquino and Abunda Tonight, Marvin Agustin and Jolina Magdangal admitted they fell in love with each other when they were an onscreen love team in their younger days. Jolina, however, said she fell more for Marvin than he did for her. “Crazy in love pero ayaw niya sa akin.” Jolina explained that Marvin was sweet to her but “hindi yun ang hinahanap kong love.”
Marvin reacted and said, “May pagmamahal na hindi mo na lang masabi kasi baka masaktan…” Marvin added, “Nakakatakot pong mahalin si Jolina. Parang masasaktan ka e.”
The two are also thankful that Flordeliza, the teleserye they star in, has aired for eight months. Marvin said the show taught him to give just the right amount of love, while it taught Jolina more about selfless love.
The two also lauded director Wenn De Ramas for challenging them as actors and creating a happy set.
Jolina and Marvin are also hoping to do a movie together.
Jolina is also excited for another upcoming teleserye Written In Stars, where she will be working with Toni Gonzaga, Piolo Pascual, and Sam Milby.
Celebrity