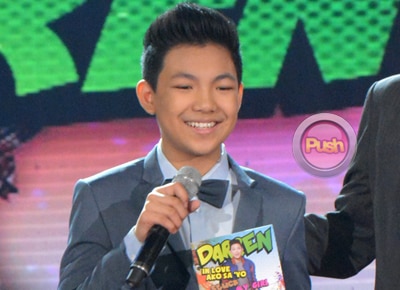 The Voice Kids Season 1 runner up Darren Espanto has gained more fans abroad as his rendition of Sia’s “Chandelier” was featured on online platform 9Gag on Tuesday.
Darren, who was praised in the feature, was described as “crazily talented.”
Although there were those who thought that he “sounded like a girl” as he belted the high notes of the pop song, many nevertheless appreciated his vocal prowess.
“Singing Chandelier effortlessly and flawlessly while sitting down.. AMAZING!!!” wrote one user.
Another user said, “I googled and found out he's 14... he's [sic] voice can still change a bit, and sometimes puberty is a bitch. Let's hope that it won't happen. Great singing...”
“Best Chandelier rendition so far,” commented another.
Among Darren’s other feats include being the youngest performer to hold a concert at the SM Mall of Asia Arena and releasing a best-selling album.
Celebrity