‘Singing in the Rain’ showcases a world-class dance performance

‘Singing in the Rain’ the musical finally opens in Manila this weekend. 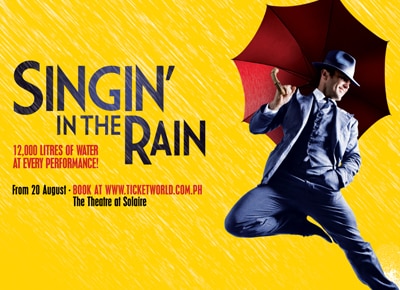 In a limited season run at The Theatre at Solaire in Paranaque City, the successful West End musical in London based on the classic 1952 MGM movie that starring Hollywood icons Gene Kelly and Debbie Reynolds finally opened to its doors in Manila last August 20. The musical Singin' in The Rain tells the story of famous silent movie actor Don Lockwood who was at the peak of his film career and his buddy Cosmo Brown during the late 1920s. But when Hollywood transitioned to the world of talkies, their world is turned upside down. Lockwood's world also gets more complicated when he becomes attracted to an aspiring actress Kathy Selden and has to turn down the advances of his beautiful but scheming leading lady Lina Lamont.
During their premiere performance last August 20, guests were both impressed and enthralled by the world-class dancing and stage design. A lot of the original movie’s iconic choreography is recreated on stage, including the most famous scene with Lockwood dancing without abandon in 12,000 liters of water. In this iconic scene, Lockwood parts with Kathy during one long night out and dances in the rain without an umbrella from sheer happiness. Before the show started, the first few rows were given complimentary rain coats to wear to keep dry in the “splash zone.” But it was all in good fun as Gene Kelly's iconic moves have again been brought to life onstage in one unforgettable scene. In this almost three hour show, get ready to laugh and love in the many colorful scenes and production numbers.
Comprised of an all foreign cast, Singin' in the Rain is the ultimate theater lovers treat because of its range of acting and dancing talent which ensure the audience lots of laughs and amusement as well as a talented ensemble which impressed the audience with their dynamism and scene-stealing moments.
Memorable songs from the musical include “Good Morning,” “Moses Supposes,” and the slapstick “Make ‘Em Laugh,” which was made famous by Donald O’Connor, who played Don’s best friend Cosmo Brown and of course “Singin' in the Rain.” Heartthrob Don Lockwood was played by actor Grant Almirall whose previous roles include playing Frankie Valli in the play Jersey Boys while aspiring actress Kathy Selden was played by Bethany Dickson whose most notable role was playing Maria in the musical production of The Sound of Music, which went to countries like China, New Zealand, and Singapore. Both lead actors are from South Africa.
Singin' In The Rain the musical runs from Tuesdays to Sundays at The Theater in Solaire, Paranaque City. Tickets are now on sale through TicketWorld. Call 891-9999 or visit ticketworld.com.ph.
Celebrity