Push lists five things that you should watch out for in the pilot week episode of ‘FPJ’s Ang Probinsyano’ TV adaptation. 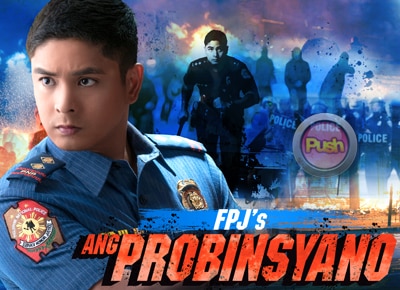 In commemoration of the late Fernando Poe Jr.’s birthday last August 20, Ms. Susan Roces and the rest of the cast of the FPJ movie remake, Ang Probinsyano namely Coco Martin, Maja Salvador, Arjo Atayde, Bela Padilla, Jaime Fabregas, Agot Isidro, Ana Roces, and Marc Acueza among others, graced the tribute screening of their upcoming primetime teleserye’s pilot week episodes.
The event was also well-attended by other celebrities such as Eddie Garcia, Richard Yap, James Reid, Tonton Gutierrez, Amy Austria, Sylvia Sanchez, Julia Montes, Cherry Pie Picache, Dawn Zulueta and Senator Grace Poe-Llamanzares. KZ Tandingan sang the teleserye’s theme song as well.
In the remake, award-winning actor Coco played FPJ’s roles while veteran actress and Da King’s widow, Ms. Susan brought life to a new character. To know more about Ang Probinsyano’s TV adaptation, PUSH.com.ph lists down five things you should watch out for.
1. Coco Martin becomes a full-fledged action star
Coco’s fight scenes are sure to keep you at the edge of your seats. This TV series is so action-packed that you will not want to miss a single moment.
2. Da King’s introductory spiels
The teleserye opens with the late FPJ’s inspiring message about good leadership and service.
3. Coco Martin and Bela Padilla’s chemistry
This remake will test the on-screen chemistry of Coco and returning Kapamilya actress Bela Padilla. Bela’s romantic scenes with Coco are something to watch out for.
4. The challenges of being a public servant
This story tackles how being a public servant like a policeman is not an easy feat. As in the teleserye, a great amount of discipline is needed and challenges, such as the tough training and homesickness just to name a few, must be endured.
Coco’s character, Ador, had to deal with people secretly competing with him, as well as corruption within his workplace. These challenges did not bring him down but inspired him to fight for what is right and do his duties faithfully.
5. The adorable Onyok
In the midst of the action and drama springs the entertaining and funny character of Onyok, played by It’s Showtime 2014 Mini Me 2nd placer, Xymon Ezekiel Pineda.
Celebrity