Robi Domingo clears up the rumor that he showed an attitude problem on the set of Vice Ganda’s show. 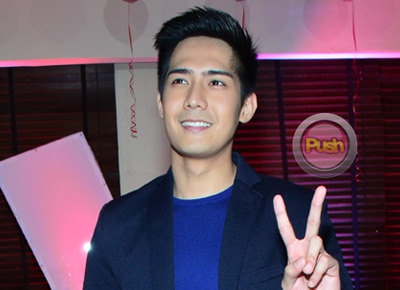 With the live semi-finals round of The Voice Kids Season 2 happening on August 22 and 23, host Robi Domingo admitted there is a special place in his heart for the current crop of six finalists from Teams Lea, Bamboo, and Sarah. “Well I'm more attached to this batch because it's easy to say because I'm part of the show and last time I wasn't part of the show (laughs). At least this time I got to be immersed in different locations from Luzon, Vizayas, Mindanao and I got to really talk to them,” he shared during The Voice Kids Season 2 presscon held last August 19 at the Cocoon Hotel in Quezon City.
The 25-year-old host also took time to clear up the rumor that he recently walked out of the set of Gandang Gabi Vice during a supposed guesting with his girlfriend Gretchen Ho. Robi said it was more of a scheduling problem than anything else. “No, no, no. I can even show you my schedule. I was really waiting for the moment. Hinihintay ko lang talagang matapos yung show. During that time it was a Thursday and may interview kami with Shaina Magdayao and Matteo Guidicelli and we were just waiting for them. Ako I'm not getting the point na ako yung bini-blame nila kasi I'm just following orders coming from my boss. If you really want to get the schedule and if you really want to get in touch with the real story, go talk to my bosses. Nagkaroon ng miscommunication pero not from my end because ang schedule ko talaga is 10 o'clock to 12 o'clock meron akong PBB Updates and then one o'clock to three o'clock may The Voice, three o'clock to five o'clock may PBB Gold then six o'clock to 8:30 merong PBB Online and 8:30 pm to 10 o'clock GGV,” he shared.
Robi said he would never consider walking out of a show or showing any bad attitude to the staff especially in front of his girlfriend. ”Respeto ko na rin kay Gretchen kasi siya yung kasama ko sa GGV taping di ba? Much more than that, respeto ko na rin kay Vice Ganda and to the program kasi they have been doing this for how many years now and this is the first time na makikita kami ni Gretchen on TV talking about our story at the same time. Ito na rin yung way para makaapg-promote na rin sa The Voice kaya why would I do something like that?” he explained.
Since their guest appearance as a couple did not push through, Robi said there is no problem with him if he and Gretchen are rescheduled to another day as long as all their schedules align.  “I'm just waiting for the confirmation kasi during that time yata si Vice Ganda ang nagmamadali so if you're going to talk to me about me walking out that's never going to happen because I love what I'm doing,” he said.
Don't miss watching hosts Robi Domingo and Luis Manzano with coaches Sarah Geronimo, Lea Salonga, and Bamboo as well as the top six finalists on The Voice Kids Season 2 during the live semi-finals this Saturday (August 22) and Sunday (August 23), on ABS-CBN.
Celebrity