Who says you can’t have a bestie despite the full schedules of a celebrity life? Here are some stars of Philippine Showbiz who we see as best besties and twinsies.

Solenn Heusaff and Georgina Wilson
They may be the most famous showbiz best friends as both being on the Fashion and Beauty A-list. They already launched their own book called “Besties” which is about “appreciating your life and having fun with your best friend." 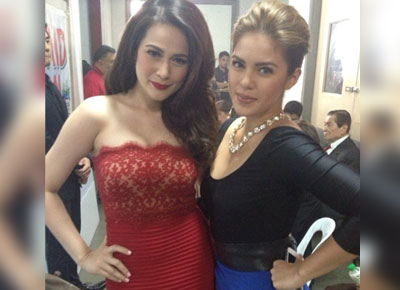 Bea Alonzo and Shaina Magdayao
Calling each other ‘cousins,’ Bea and Shaina’s ‘best friends for life’ tag has stood the test of time. They are both Star Magic Artists with the same handler. The two may not be always seen together but they always find time to catch up on each other’s life.
Photo Source: https://4.bp.blogspot.com/-u020duZOEGw/U52t392j4HI/AAAAAAAAyZU/nAXcPYqm0_U/s1600/Screenshot_2014-06-15-22-32-40-1.png Kathryn Bernardo and Miles Ocampo
They first met at an acting workshop before joining the kiddie gag show “Goin’ Bulilit.” Growing up together, they have become best of friends on their way to a much bigger field in Philippine Showbiz.
Photo Source: https://2.bp.blogspot.com/-RvfdxuDg8Dw/VQQ_CTIVL1I/AAAAAAABFlI/-EtCzL2B8ZM/s1600/Screenshot_2015-03-14-21-21-50-1.png Vice Ganda and Coco Martin
“Alam namin kung saan kami nanggaling,” Vice recalls when asked about his similarities with Coco. Considering themselves having the same blow during their struggling years, they seem to understand each other more than anyone else could. Angelica Panganiban and John Pratts
These two started off as stars of the teen show G-mik (together with John’s sister Camille Prats, who is also Angelica’s best friend) and had no idea that they would be best friends forever. True enough, Angelica was the “best woman” when John finally tied the knot with Isabel Oli last May.
Photo Source: https://ffemagazine.com/wp-content/uploads/2014/02/bananafriend.jpg Luis Manzano and Anne Curtis
These two are one of the most famous besties in showbiz. Describing Luis as ‘someone she would marry,” Anne brags about the many things that they have in common. And would you believe that they dated? But the dating soon turned into a relationship that is more than they could wish for -- them being best of friends
Photo Source: https://igcdn-photos-f-a.akamaihd.net/hphotos-ak-xpa1/t51.2885-15/927536_396090437188557_641771781_n.jpg Liza Soberano and Enrique Gil
These Forevermore stars are actually best friends, putting aside the fact that they already expressed their admiration for each other. “You are the best guy friend anyone can have,” as said by Liza on a letter she gave to Enrique which he read on an interview with Love Out Loud. Can this be a great story of a bestfriend-turned-to-love-relationship? Gerald Anderson and Rayver Cruz
Yes! They are actually best friends despite them both being linked to Sarah Geronimo. The two first met in 2006 during a basketball event. Until now, their common hobby is what keeps them BBFs -- Best Bros Forever.
Photo Source:https://3.bp.blogspot.com/-GZFwN8bsIXQ/VWMyKTTdBSI/AAAAAAABLDI/iLXhmmfhuls/s1600/IMG_20150524_213824_467.JPG Maja Salvador and Cacai Bautista
Despite their showbiz stance -- Cacai being a comedian actress and Maja being seen on most teleseryes as a drama actress, these two fits perfectly with each other. These besties’ closeness started when Cacai toured with Maja in her first dance concert series. Maja calls the comedian “My Kiffie” while Cacai has defended Maja from controversy a couple of times.
Photo Source: https://tinypic.com/view.php?pic=24eb8yf&s=7#.VbogMaSqqko Angel Locsin and Dimples Romana
From reel to real friendship, these two first met on the set of Only You, playing as best friends. And who would have thought that’s what they would turn out after the teleserye ended? In one Kris TV epsiode, Angel said about their friendship, "Hindi kami KSP (kulang sa pansin) na magkaibigan. Hindi namin kailangan ng assurance lagi. Sasalo ako ng bala para kay Dimps. Ganun ang level ng friendship namin."
Photo source: https://push.abs-cbn.comhttps://push-data.abs-cbn.com/push/archive/features/2014/070914/crosseyed.jpg
Celebrity