Coleen Garcia and Derek Ramsay stress that there was never an intention to disrespect the medical representative profession. 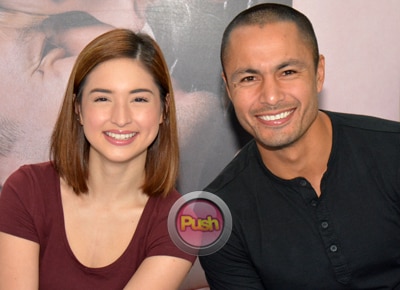 Coleen Garcia and Derek Ramsay spoke up about the recent issue circulating regarding their movie Ex With Benefits. Some medical representatives expressed their dismay over how their profession was depicted in the movie trailer that was released recently. Coleen plays the role of Arkisha, a medical representative who needs to get the endorsement of a top doctor—and her ex-boyfriend—Adam played by Derek. In the trailer, the characters end up having a romantic scene.
At the bloggers’ conference of the movie, Derek said that one should first watch the movie before making a judgment. He also stressed that they never intended to disrespect the medical representative field and they the whole cast and staff have utmost respect of the said profession.
"There are some reactions that we are disrespecting the line of work that med reps do. But I feel like anything in life, before you assume anything, you should get as much information as you can. And sana these people, no disrespect to them, would give us the chance to show that we are not disrespecting them, that we have complete respect with what they do,” he said.
He continued, “Everyone working on the set, we look at them, know how hard their work is because they have to deal with different products, they have to know the background of their products and they need to deliver that to the doctors in a way to gain their trust and I think the harder part is gaining the trust of the doctors out there so sana they give the movie a chance and then say their piece after they watch the movie.”
Coleen remarked that more than anything, the story is about two ex-lovers who are trying to work things out. She also said that people should know the whole story of the movie before making a conclusion.
"I understand naman why they got offended. I have been reading some of the threads just so I could see because it’s also good to be well-informed through things like that before we promote the movie. Just so we know what angles also, where everybody is coming from, [that] I understand. And the thing is the story it’s not about the doctor and the med rep. They may be a doctor and a med rep but it's really about two ex lovers coming back together and going through ups and downs and it’s really about their story more than anything. It just so happens really that they are a doctor and a med rep. So it’s really more about the character flaw of my character, Arkisha. It’s something that she’s been through [in] the past that caused her to be the way she is. It’s not to say na all med reps are like that at all because I myself, I’m against generalization. I don’t like generalizing people based on their profession, based on anything,” Coleen said.
She added that her character is like that for a certain reason. She further stressed that as the cast has already watched the entire movie, they did not see anything offensive about it.
“So I believe we are all different and thing about Arkisha that makes her different are the things that she went through in the past. And if you guys watch the movie, when it’s out, you’ll see that she’s been through a lot and then you would understand kung bakit siya naging ganun so there’s a reason. Everything stems from a certain reason and hindi yung basta basta na ganon lang siya, ganon ang pagkatao niya. She’s the only one there who’s like that. I mean there are other med reps, there are other characters there but they are not like that so I could understand why people would jump to conclusions because that’s the only thing that people have seen so far. And for us, we’ve never seen anything offensive from the movie because we know the whole story so I just pray that people would give it a chance before they judge," Coleen stated.
Celebrity