Benjie Paras speaks up about the possibility of his son Kobe playing for the NBA. 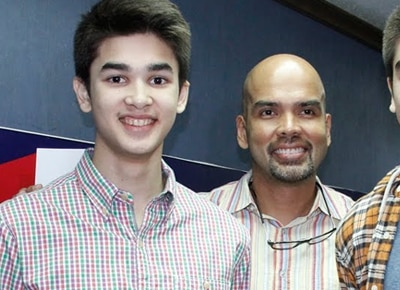 Benjie Paras reacted to a comment from an NBA scouting website saying that chances are high that his son Kobe Paras will soon be playing for the NBA league. In an interview with Benjie with GMA News, the former PBA star stressed that he does not want to rush things for Kobe and he wants his son to focus on his schooling first at the moment.
"We don't look at it that way. Parang take it one step at a time. As of now, I want him to focus on his last year dun sa high school. And then we'll see what will happen in college," he said.
Kobe is presently part of LA Cathedral's Phantoms. He is set to attend University of California, Los Angeles and be part of UCLA Bruins after being offered a scholarship. Recently, Kobe was tagged as a “potential” NBA prospect by scouting website Draft Express. According to Mike Schmitz, he wrote that Kobe has the potential to make it to the NBA but he needs to improve more as a basketball player.
"He has the physical profile, athleticism, and shooting ability of a high-major wing, and potentially a NBA prospect. He can score at all three levels, finish above the rim and has the tools to be a very good defender. The UCLA commit, however, has a long way to go in terms of playing the game the right way and fitting into a team scheme. He does a lot of things that may earn him a very short leash very quickly under head coach Steve Alford. With that said, if Paras is willing to put in the work and can find a way to think the game at a higher level and become more of a team player, he has a chance to be a high-level player in the Pac-12 and set himself up for a successful future beyond the college ranks., possibly in the NBA depending on how his skill-set evolves,” Mike stated.
Kobe was a former student of La Salle Greenhills before flying to the US to pursue a basketball career there. He is presently on his senior year and will be in college in 2016.
Main photo credit to YouTube.com
Celebrity