Angeline Quinto explained that she really wanted to be part of the soap but her schedule became problematic. 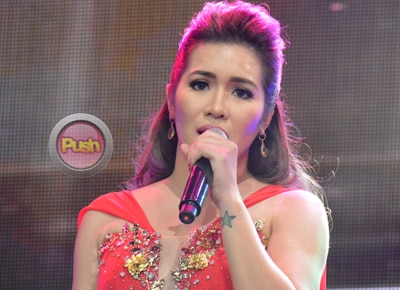 Queen of Theme Songs Angeline Quinto's recently-concluded first ever major concert at the Araneta Coliseum together with Erik Santos was apparently the reason why she didn't push through with the soap Ang Probinsyano.
The upcoming soap, which is set to be headlined by Coco Martin, is the TV adaptation of the late Fernando Poe Jr's movie of the same title.
Months back Angeline was introduced as one of Coco's leading ladies along with Bela Padilla. But then, some weeks later, reports had it that she will no longer be part of it.
In an interview with Angeline after her successful concert, she explained that she knew about the decision for a while now.
"Opo medyo matagal narin 'yun nung nalaman ko. Hindi ko lang agad in-open sa mga tao kasi hindi ko alam kung pwede nang sabihin. So ngayon totoo po 'yun na hindi na po ako kasali," she said.
Angeline however clarified that it was not her decision to leave the show,
"Hindi po. Actually nagkaroon lang ng problema sa mga schedule kasi before pa kaming magumpisa para sa preparation sa concert, may mga schedule na para doon sa taping," she said.
Angeline continued, "So ngayon nag-iba parang ang nangyari before ng concert namin doon na mag-e-everyday na taping. Eh hindi po kakayanin para dito sa concert so sabi ko parang 'yun nalang ang nag-suffer."
Despite the incident, all is well between Angeline and Coco. In fact, the award-winning actor was even present during her concert. In one part of the show, Angeline, much to the fans' delight, even called him up onstage.
Although her expected acting return was temporarily put on hold, Angeline says she still wants to take on other projects,
"Oo naman, dream namin ni Erik sana magkaroon kami ng MMK [Maalala Mo Kaya]," she revealed.
According to the two singers, there have actually been offers for them to do an MMK episode. Unfortunately though, the supposed shooting days always coincide with an earlier engagement.
Celebrity