Piolo Pascual talks about what he fears most when he's in and out of love. 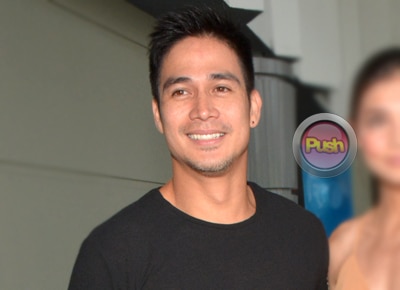 As the star of the romance thriller movie Silong, Piolo Pascual admitted playing the role of the mysterious and reclusive doctor Miguel was an unforgettable experience. “This is my most challenging role I should say. It's complex definitely. As [part of] an audience myself, I want to be surprised whenever I watch a film. I don't want an ending that I know already. So this is quite a sense of fulfillment for me to watch something na nobody has any idea what’s going to happen. I guess one of the reasons why I accepted this is because of that, how do you get into that kind of thinking, kind of twisted,” he shared.
The Kapamilya heartthrob hoped to show his fans a different kind of Piolo with the intimate scenes he shot with Rhian Ramos for the film. “Honestly, it's your responsibility as an actor—knowing how far you can go and not to necessarily challenge myself into doing things that I'm not comfortable with, but as an actor it's my responsibility to just take on characters na even myself would be surprised. So now I was definitely surprised (laughs). It's not about sexiness or anything. It's what was needed,” he explained.
When asked during the special media screening if he plans to let his son Inigo watch his racy scenes, Piolo said there is no issue there, “He doesn't know anything. He was supposed to come. I'm going to let him watch it sa premiere.”
With Silong being chosen as the closing film for Cinemalaya 2015 on August 14, Piolo hopes those who watch it will appreciate his latest project. “Honestly I just want people to enjoy the ride and be surprised just like how we were surprised. Iba yung ride eh. Iba yung anticipation, the intensity especially pag alam mong nagkakasakitan na. Masakit na parang it's nice. It was morbid, wow it was intense. I guess it's a good shift. You know I've gone back to doing rom-coms with Starting Over and The BreakUp Playlist and this is a script that I live for. I want something that will challenge me as an actor. Not naman that rom-coms are a walk in the park because it's still hard because you get to play different characters. But to get to do something like this that's not anything like me in real life so the last thing in my mind is what the audience will think of me. At the same time as an actor I know 20 or 30 years from now, I'll look back at this and give them myself a pat on the shoulder,” he shared.
Being currently single, Piolo said it is through his characters onscreen that he gets to exercise the feeling of romantic love for now. “Dun ko na lang ini-express. Sa sobrang busy natin I don't think I would have time for anything else. I'm happy to be watching a mainstream film that I was part of and then something so different for a couple of weeks, one movie is black and white and the other with John Lloyd (Cruz). You know you don't think about this, you don't plan things, you have certain goals in life but you should just go with the flow and when it happens, it happens,” he said.
With each passing year, Piolo admitted he has grown to become pickier when it comes to finding the right partner. “Of course. In the past someone told me that the more na pinapatagal mo na you become more comfortable being single and then it becomes so complicated and difficult kasi parang you only get to choose once so parang the more you enjoy being single. I enjoy not naman necessarily dating but owning my time. Nakakatakot di ba? Yun nga lang, dapat hindi ka dapat nagpapaapekto sa edad mo, sa panahon at sa sinasabi ng tao. Just see where it goes,” he said.
Piolo also shared why he is in no hurry to find the perfect girl. “The reason why I'm single I want to be able to move for myself kasi isa lang naman yan eh so why rush it? Wala naman sa qualities yun eh. You know I've come to that point in my life na hindi ko na iniisip yung mga set of requirements of values that you are looking for in a girl. When it falls in place, it happens eh. I don't think of these things,” he admitted.
Just like any regular guy, Piolo said he has already experienced and enjoyed the feeling of love at first sight. “Oo naman. Yeah I love the feeling of kilig and then you get interested and then you pursue it and go from there. I believe in all those things,” he said.
Celebrity