Piolo Pascual is not in a rush to settle down

Piolo Pascual talks about his ‘disturbing’ movie with Rhian Ramos, upcoming film with John Lloyd Cruz and thoughts on settling down. 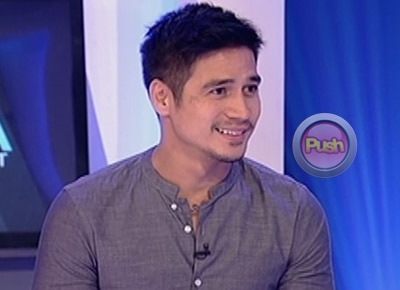 On Aquino and Abunda Tonight, August 11, actor Piolo Pascual talked about his 2015 Cinemalaya movie with actress Rhian Ramos called, Silong.
Acknowledging his daring scenes with Rhian, the actor said, “I don’t want people to focus on the daring scenes or the love scenes. It’s more a study of characters na I couldn’t move from my seat for 10 minutes after the movie ended. It was disturbing… Mapapaisip ka kasi iba ‘yung konsepto niya.
“I play a doctor na namatayan ng asawa tapos nakita ko si Rhian na duguan and everything. I took her in, I took care of her tapos doon nagsimula,” Piolo said about his character.
Piolo, who also produced the movie, said that Rhian is very professional to work with.
Meanwhile, the actor-producer also talked about his upcoming film with actor John Lloyd Cruz entitled, Hele sa Hiwagang Hapis or Sorrowful Mystery, written by Lav Diaz.
Although they have finished shooting already, they have yet to decide on its playdate.
Aside from John Lloyd, Piolo will be joined by Angel Aquino, Cherie Gil, Bernardo Bernardo, Alessandra de Rossi, and Susan Africa in the film.
Meanwhile, in reference to his Instagram post expressing that he wants to work again with former love team partner, actress Judy Ann Santos, Piolo was asked if he has a certain project in mind. He replied, “Marami na pong materials sa Star Cinema siguro we’re just waiting for the right timing for it.”
Piolo also explained the context behind his pastor telling him to stay single as he will get used to it. “The thing is, ang sinasabi niya, the more na tumatagal, tumatanda ka tapos single ka pa rin, the more na ineenjoy mo ‘yan, baka hindi ka na mag-asawa kasi matatakot ka nang may kasama ka sa buhay. Which is what is happening right now.” Not in a rush, Piolo said, “It’s just that nakakatakot kasi parang wala kang kailangan uwian, wala kang kailangan pagpaalamanan. I do what I do when I want to do things because I’m independent. In time,” adding that he’s not yet thinking about it.
Celebrity