Iza Calzado gets surprised by boyfriend on ‘Aquino and Abunda Tonight’

Iza Calzado’s boyfriend, Ben Wintle surprised her during her guesting appearance on ‘Aquino and Abunda Tonight.’ 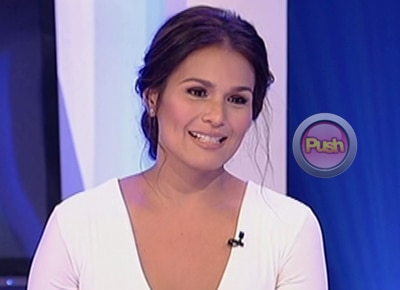 Iza Calzado’s boyfriend, Ben Wintle surprised the actress during her guest appearance on Aquino and Abunda Tonight, August 11.
Ben came onstage with a bouquet of flowers and a cupcake with a birthday candle, much to the actress’s surprise.
Iza told him, “Thank you for being here. Thank you for being patient… Thank you for loving me.”
Ben, on the other hand, wished her well, “I hope that you wake up every day of next year feeling happy and sexy.”
Earlier on the show, Iza told Boy her birthday wish, “Good health for my loved ones, ‘yung ang unang una and for myself. And, siguro my biggest wish for now, kung magiging selfish man ako ay sana kung anumang gusto kong gawin sa buhay ay suportahan ako ng mga mahal ko sa buhay at ng mga tao sa paligid ko at sa Pilipinas.”
In light with this, Iza said that it is her biggest dream to make it in Hollywood, “And I met with some agents and managers. My agent is not yet 100%, but I found a manager which is a big thing so I’ll keep going back and hopefully, soon enough, when I get my visa and when the time is right, I’ll start auditioning.”
Celebrity