The two stars work together for the first time in the Cinemalaya romance thriller Silong. 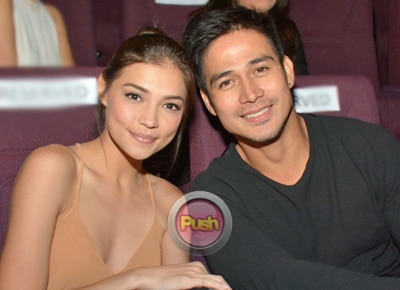 In her first movie together with Piolo Pascual, Rhian Ramos admitted she never thought it would be possible to work with one of the country's top heartthrobs. The Kapuso actress says this was one big factor why she agreed to work on the romantic thriller Silong which part of the Cinemalaya film festival.
“That was also something that I was very excited about because when we shot this talagang I would never foresee working with anyone from the other network and then I kind of just realized we can do indie films. Kasi sa GMA I've worked with not naman almost everyone but a lot of the leading men. I've never really had a love team that I would work with for every project so just when I had thought na I'vr worked with pretty much everyone that I wanted to work with, this project came in and I already loved the script. When I asked who is in it and they said Piolo Pascual, I was like, 'What? Seriously? I can do that? Sure!' He's on the bucket list of many of my friends and that's good enough for me (laughs). I don't really have one but if I could be able to work with a lot of people and learn from them because every experience you have to adjust,” she shared during the special screening of Silong held last August 7 at the Greenbelt 3 cinema in Makati City.
Piolo, who is also one of the producers of this independent film, said this is the darkest character he's ever played on the big screen.
“It's a different concept that sometimes we want to see para hindi naman lagi yung ine-expect nating mapapnuod natin. It's a mystery. I like the concept kasi sobrang iba nga siya, even our roles nakakagulat. Magugulat kayo sa parehong twist ng roles namin. I play a doctor and I'm grieving because my wife left me. I see Rhian and that starts a love story. But it's not a love story after all is it? It's nice, it's a romance thriller and it's a different kind of love story altogether kaya it's interesting. Puwede siya mag-border sa pagiging schizo kasi it's so intense so you have to breathe the character, you have to believe in the character. It's demanding physically and emotionally. Ang daming nangyayari,” he explained.
Aside from being the first thriller project for the two lead stars, Rhian says Silong also marked her first love scene in a movie. The 24-year-old actress described the sex scene as intense and daring. “My hands were so cold and I was freaking out and we had not really a workshop but a chill getting-to-know-you kind of time first before shooting. While they were setting up kasi the set we were free for like a whole hour and I was sitting there with my wine and we were just chatting about life and sharing things about ourselves. I feel that we established a level of trust by opening up to each other. But I want you to know that my aggressive moves were in the script, they're not adlib (laughs),” she recalled.
Piolo revealed he had to guide his leading lady throughout some of the more intimate scenes. “It's all part of it. Rhian she was really, really getting stressed. You have to help her of course. You know what to cover, what to not show. It was really daring. We don't want to sell the film as a sexy film. It's not. It's essential. Kailangan yung eksena sa pelikula since we're both intense, intense din yun. (laughs) Medyo nakakatakot pero I guess for the love what we do, for the sake of art as they say, but respect for the craft and just really giving it back to what's given us work. This is what we do and ang sarap lang, ang sarap ng experience.” (continued on next page)
During the special media screening, Rhian told the press it was the script that made her say yes before she found out who her leading man would be. “So far kasi it was the only love scene that I read that was actually necessary for the story and not really a marketing tool. So it's the only one that I said yes to. In my past movies naman they also had love scenes it's just that we had them removed because they weren't necessary. But this one was really part of the story and he's really good looking so why not? (laughs). Sige na!” she said jokingly.
The Fil-British actress says Piolo really took care of her on and off cam. “We actually put a couple of the daring scenes in the trailer which my mom was very shocked to see. But it was all on him. If the scene turns out well, you can really attribute it to him. (why stressed?) Well it was my first ever love scene and I'm happy it went to Piolo because he's a veteran (laughs). He's a love scene veteran. That's one of the things I talked about when I said I really needed help and he gave it to me. Basta every time direk Jepoy would yell 'Cut!' Even before I could move, he was the first one to immediately cover me up and say, 'Are you okay?' the whole time and I was like, 'Wow, thank you,” she remarked.
Silong will be shown as the closing film in the Cinemalaya 2015 on August 14. Starring Piolo Pascual, Rhian Ramos, and Guji Lorenzana. Directed by Jeffrey Hidalgo and Roy Sevilla Ho under Black Maria Pictures and SQ Film Laboratories.
Celebrity