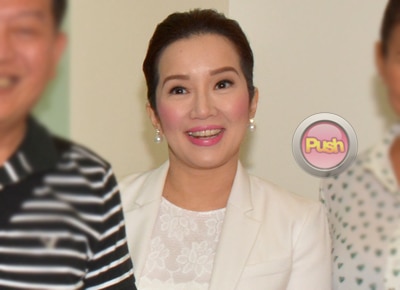 Queen of All Media Kris Aquino has been updating her followers through her Instagram account that she has been suffering from fever and colds. She posted pictures of her together with her sons from time-to-time and captioned one of her photos with, “I have fever, temperature is 38, but this guy (referring to son Bimby) said he'll just keep hugging me so I'll feel better.”
In one of the photos that she uploaded, one of her followers commented and said, “God said ingatan mo ang sarili mo at iingatan kita but if you abused it that's different story may kalalagyan ka and that's too bad. You don't have time to listen what your body saying money, money that's what u want. Very powerful ang pera sa iyo sad to say. Good luck.”
Kris defended herself and said that it’s not all about the money.
She told the basher, “You deserve a reply because you are so judgmental na wala sa lugar- if I didn't show up for work, did you think how many people in the production & the crew wouldn't get paid? If I packed up my taping for Kris TV or my movie, how many of the staff & crew who get paid daily won't have their salary? This is the truth- I am rich, my sons are provided for but I have a responsibility to those I work for & those I work with. And that is not being selfish but knowing the value of hard work & pakikisama. Masaya bang mag work na ubo ng ubo & w/ fever? Ang LAKAS ng loob mo to judge me when your account is on private- I was raised w/ the right work ethics & the courage to stand by my values- judge me again when you've gained some of that.”
She later on posted a photo of their short conversation and said in the caption that she also thinks of the people working on her morning show Kris TV and movie Etiquette for Mistresses who won’t get paid if she does not show up for work.
Celebrity