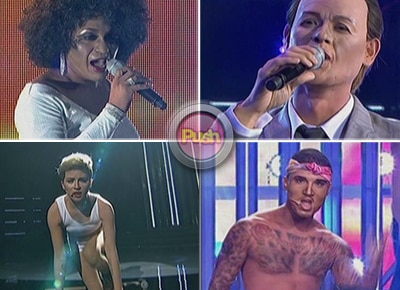 During the first half of Your Face Sounds Familiar’s Grand Showdown, the final four namely, Jay R, Edgar Allan Guzman, Melai Cantiveros and Nyoy Volante wowed the audience with their surprising impersonations live at the Resorts World Manila, Saturday night, June 6.
RnB Prince Jay R transformed into the iconic singer Frank Sinatra and performed his equally iconic song, “New York, New York.” The jury members commended his passion and felt that Jay R was able to internalize his character well.
Dedicating his performance to his father, Edgar Allan Guzman impersonated his idol, Chris Brown and sang, “Turn Up the Music.” Jed Madela called him one of the show’s revelations.
Meanwhile, Melai earned massive praises for her impersonation of Miley Cyrus and her performance of “Wrecking Ball.” Noticeably, cheering for Melai in the audience is her no. 1 fan, husband Jason Francisco.
Last but not the least, Nyoy Volante hit the high notes as he impersonated Whitney Houston and sang, “I Will Always Love You.” Jury member Gary Valenciano said that Nyoy was able to pull off the performance from the very start.
Before the show ended, host Billy Crawford announced that Your Face Sounds Familiar will return for a second season.
To vote for your first YFSF grand winner, text YFSF <space> <name of artist> and send to 2331 for ABS-CBN Mobile, Globe, TM and Sun Cellular subscribers; and to 231 for Smart and Talk ‘N Text subscribers.
Do not miss the live announcement of the grand winner tomorrow after Rated K on ABS-CBN.
Celebrity