What happened to the former child actor? 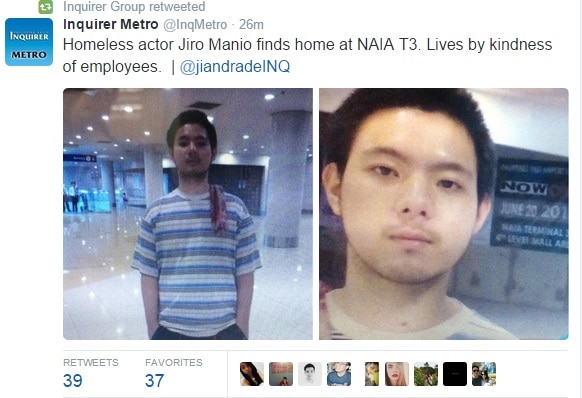 Former child star Jiro Manio is now homeless according to the Tweet of Inquirer reporter Jeanette Andrande.
According to Andrade, Manio is now living at the NAIA Terminal 3 with the help of its employees. Security guard Frank Sorca said he noticed the actor wandering around the airport and looked like he had not had a meal in days. He gave Manio some clothes and food. When asked why he was at the airport the actor only said he had enemies at home. The guard added he also noticed that Manio had bruises on his body.
People at the NAIA observed that Manio has no idea why people were being kind to him. When asked if he is an actor, the former child star said he wasn't and asked for evidence he was one.
Manio last appeared on TV via the show “I Dare You” in ABS-CBN, where he accepted a mixed martial arts challenge to win scholarships for his two children.

Now 23 years old, Manio admitted to drug use and entering rehab in 2011. He was vocal about his intention to return to acting and said he wanted to be reunited with his mentor director Mario J Delos Reyes.

He has won 4 Best Child Actor awards, 3 of which are from his multi-awarded film “Magnifico.”