The young star says she is a big fan of her aunt. 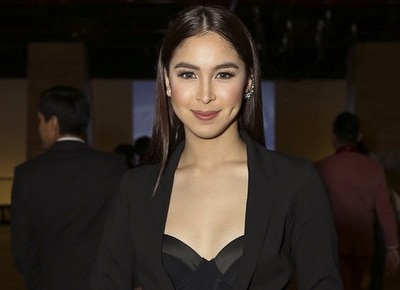 Young actress Julia Barretto expressed her joy over her aunt, Claudine Barretto’s comeback to the Kapamilya network.
ABS CBN news reporter Mario Dumaual had a chance to talk to the young actress during the annual Preview Ball. She said she’s a big fan of her aunt and that she will support her aunt’s comeback project.
“Nakita ko ang mga pictures kahapon, I’m so happy for her. Siyempre naman, I’ll always be happy for her. I’m excited for her. I’m still a huge fan so aabangan ko talaga ‘yun,” she said.
Both Julia and Claudine are busy with their careers as of the moment, as the young star shared that she’s preparing for her new series “And I Love You So” with Inigo Pascual.
“And I Love You So” also includes actors Raymond Bagatsing, Luke Jickain, Jay Manalo, Benjie Paras, Dante Rivero, Miles Ocampo, Angel Aquino and Dimples Romana. Its premiere date has yet to be announced by ABS-CBN.