EXCLUSIVE: Pia Wurtzbach says she is the perfect anti-bullying advocate

Pia Wurtzbach shares how she will teach Pinoys how to defend themselves. 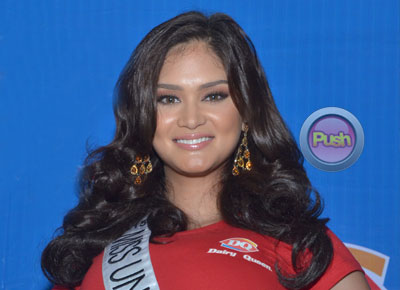 With the exact date and venue of the 2015 Miss Universe pageant still yet to be announced for this year, Binibining Pilipinas Universe winner Pia Wurtzbach admitted that everything in her personal life has to take a back seat for now. The 25-year-old beauty queen said she cannot even consider being in a relationship before the much-awaited beauty pageant. “I can't look because if I look I get distracted (laughs). So the crown is the focus right now. That's the tunnel view, I'm looking at that right now,” she said to Push.com.ph during the Dairy Queen presscon held last June 23 in Gateway mall in Quezon City.
Aside from doing various workshops, the Fil-German beauty said she is watching what she eats, which sometimes proves to be difficult since she is now also an official endorser of Dairy Queen Philippines. “I keep a food diary so I send everything that I eat to my trainer. When we endorse something like Dairy Queen of course hindi maiwasan to try it. So I have to send that to him and pay for it big time the day after in the gym (laughs). Gusto ko yung fresh toppings eh so I like the ice cream with the strawberries. The Strawberry cheesecake Blizzard is my favorite. I do have a sweet tooth actually and it's been very hard to put that aside. But kaya naman,” she said.
Ever since winning the crown earlier this year, Pia admitted she has her fair share of bashers online. But she also revealed that she has been dealing with these kinds of negative people all throughout her life so it is nothing new. “Growing up, I was bullied for little things. As a kid, I'd be bullied because I was the tallest in class. I'd be bullied because I was a wallflower. I was quite shy. I was the only tisay in the class. Mga little things like that. And then also when I started showbiz I had to switch from regular school to the homeschool in ABS-CBN because may mga nang-bu-bully din. Even as an adult now when I was working in England I would still meet people who I felt discrimination from because I was Filipina or because I was Asian. Or sometimes in the kitchen because I was the only girl then. I used to work as a chef in England sa Theobald's Park. Before I did culinary I was a waitress sa Marriott hotel for three years and I was the youngest and the only Asian doon sa buong hotel na yun so I definitely felt it. When I did culinary, they questioned me for a bit because I was the only girl in the kitchen. I still performed well. But then you know at first they doubt you because of where you’re from, these little things. To me, that's like some form of bullying pa rin because you’re not giving the person the chance to bring out their full potential. And even now, even when I was first runner-up I still get scrutinized for that. When I didn't make it I still got bashed for that and when I did make it, even more bashers! (laughs) So it never really ended. I think if there's anybody who's going to be the perfect example of standing up for yourself and knowing how to block off the negativity that would be me,” she explained.
Pia said all these experiences in her life have helped her deal with the even more complicated challenges that come with being a top beauty queen. The former Kapamilya talent said she wants to be a good role model for those who also find themselves being bullied. “I'm definitely stronger now. I've learned how to deal with it. I guess even though I had experience with showbiz before it's not the same as now. The attention I get and the scrutiny now is on a different level, but I think that I've been handling it very well. I continue to defend myself in situations where I feel like I need to stand up or myself. I don't think there's anything wrong with that. Like if I'm going to talk to the youth and talk about empowering them and standing up for themselves and standing up for being bullied then I'm the perfect example of that because that's what I do. I don't just sit down and take whatever is thrown at me. When I know I'm in the right and I know that things are out of line, I speak up about it. And maybe that's why I spark more bashers but the thing is, that's the way it is,” she said.
As a proud Pinay, Pia said she wants people to see her actively defending herself so they can be inspired to do the same someday. “I don't want to be a hypocrite and talk to people about standing up for yourself when I can't even do it for myself. So I think as long as you know where your boundaries are and as long as you know how to word your sentences properly then I think you would be able to stand up for yourself and set a good example for others. So I think I've been handling it pretty well,” she added.
Celebrity