Daniel Matsunaga on finding ‘The One’ in Erich Gonzales: ‘I waited for so long’

Daniel Matsunaga says he prayed for three years for the right girl to come along. 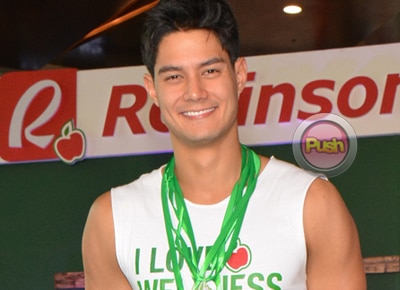 With a flourishing career and a happy love life, Daniel Matsunaga said all his perseverance and hard work has paid off ever since he joined showbiz in 2012. “I'm very blessed. I waited for so long, three years praying hard for a nice relationship and a person with all the qualities I was looking for. Marami, God-fearing, close to my family, mabait and everything. I found it! Yaay (laughs),” he shared.
Daniel still chose to keep details of his relationship with Erich Gonzales to a minimum because of their promise to Kris Aquino who was the first person who started pairing them together. “You will have to wait for Kris TV pa kasi we promised Kris and this month we already have it blocked in our schedules Maghintay na lang kayo,” he says during the Robinson's Supermarket I Love Wellness campaign held last June 19 at Robinsons Place Magnolia in Quezon City.
The 26-year-old Brapanese hunk said he will never get tired of defending his new girlfriend against malicious rumors aiming to break them up. Daniel couldn't help but show anger at those who say Erich was bribing his family with luxury gifts. “That's not true eh. That's a fake blind item. Siyempre it's just bullsh*t. It's so fake and they don't have any other source to try to prove something and try to invent something just to put us down. It's such a sad thing. It's actually sad because I don't know where that came from and who are writing those things. I think it's just a waste of time. And they're trying to make people believe in wrong stuff so I think it's just very sad. It's not true but whatever it is, we have a very big faith in God and God is first in our relationship. He is at the center of the relationship and that's what matters. In the end we have to be strong and in everything that happens, it's the two of us against the world,” he explained.
When asked why he always refers to Erich as his “spartan baby' on social media, Daniel said it all started from his own nickname which he uses when working out. “Yung hashtag came from kasi I'm really active in sports. I do my workouts araw-araw nasa gym ako and then may football pa so yung dream ko was really to do yung spartan race sa States. Meron silang spartan race na sobrang astig. And every time I do any post regarding mga workout, siyempre I just hashtag myself spartan-something. I call her spartan baby because she's my baby (laughs),” he explained.
During a recent work trip abroad, the Robinsons Supermarket celebrity guest admitted he almost got left behind by the plane because he was so intent on finding the perfect pasalubong for Erich. “Yeah siyempre I was really looking for her chocolates there in Dubai. I went everywhere because she really wanted that chocolate so ayun, it's a small thing that I can do so why not di ba? For my loved ones I'll do everything to make them happy,” he recalled. Daniel said he and Erich are also set to do a movie project together under Regal Films later this year.
With the start of Pinoy Big Brother's newest season, Daniel said he also wishes the newest batch of housemates good luck. “Excited ako para sa kanila. I'm very, very excited for them. Actually this time, watching them, alam ko lahat ng puwedeng mangyari sa loob ng bahay ‘di ba? Alam ko mahirap siya. Minsan you think madali lang pero mahirap talaga siya and I just wish them the best, that they really trust God in everything they do and alam ko they will really enjoy all the tasks for them for their improvement and for them to grow as a better person. I'm very excited for them and I wish them the best,” he said.
Celebrity